I have an Ipad, it’s true.  Despite the fact that Apple’s image grooming rankles my very soul, there are some titles that come out on the IOS that I find worth a playthrough.  4 the King makes that list, and though it isn’t much more than a game I would play on a train or bus ride, it satisfies my game itch well.  Considering its indie status, I pointed developer Hypnic toward IndiE3.  4 the King was released Friday, June 6th.

4 the King is, at its heart, a Tower Defense game.  You have a lonely little castle in the kingdom of Sahana and for some reason witchcraft of unexplained origin has brought your vegetables to life.  Evil pumpkins, fly-traps and corn-launchers storm your castle gates!  Yea, it’s a little silly, but the lead in mobile games is one where you launch suicidal birds at pigs to knock over their houses for eating your children.  Just hire a mercenary, or better yet, entreat the UN on behalf of your people.  The pigs will eventually get sanctioned.  So, all things considered, this game is fine by me.

Initially you will feel some boredom since the early stages are easy. Like every other fucking game in history, but it ramps up pretty quickly.  By the end of the first realm I was scrambling.  And though I didn’t die until the first boss, there were enough close-calls to make me think I was lucky not to bite it. 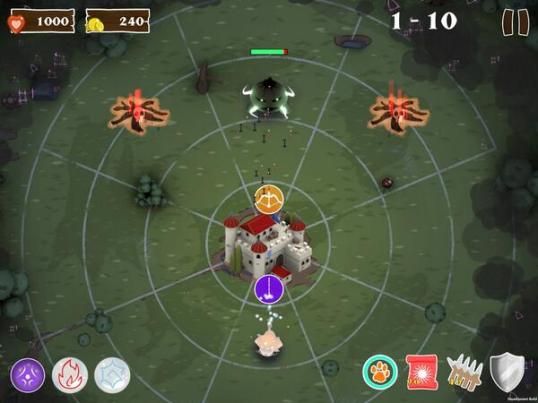 And the first boss is a prick, too. Big as fuck and walks all over your battlements.

In your divine wisdom as a king, you tell your people to huddle up in the city and fire everything you can find at the fuckers.  You start with arrows, which fire quickly for lower damage at multiple targets, and quickly add a wizard to your arsenal that fires slowly for higher damage at a single target.  You build defenses on the regions of this giant dartboard by killing monsters and getting money or taxing a village that is sometimes on the board with you.  You build up cash and put out things like spear-walls, magical fire traps, entangling vines and other fun stuff.  At one point I freed a tiger and got the ability to summon it.  No idea how, but fuck it, I got it.

You’ll also get magical enhancements that enable the enchanting of your weapons with ice or fire.  During boss battles, against mini-bosses and the middle of sheer bloody fucking panic, you will find these useful as they increase the damage each shot deals.  If you have a spell or defensive item you bought and that you want to bring out, you click the shield or… purple.. magic… button.. to open a menu and select the item you desire.

Between missions, you will have the opportunity to buy upgrades for your weapons, spells, defensive items and other things.  The money you get from missions will buy you upgrades,  Not the kill or taxation funds, but you get some cash for beating each mission.  And you can replay each mission as well, gaining you more gold to spend on upgrades.

Honestly, I am not into tower defense mods and games, but this one was caught my attention.  Sometimes you can get a natural barrier aiding you, like rocks.  When this happens, enemies that spawn behind them take the long way around, buying you time to react.  It’s not exceedingly tough, but again it has a sharply increasing curve.  You won’t beat it right away and you’ll get some satisfaction out of it, which is good for a game bought for play in-transit or during waits.

A new realm, stronger weapons and diverse enemies feature in this screenie. Relevant if you want to see how things will change one realm to the next.

So what about this game wore on my nerves? Mostly the fucking tutorial.  The tutorial in this game frustrated me a bit. Tutorials in most games are annoyingly necessary rites of passage that you have to pass through in order for the game to let you be and have fun.  The first realm in 4 the King is filled with brief tutorials and explanations.  Not to mention, the tutorial has you touch the weapons to fire.  I thought this meant I had to fire tap the weapon to fire.  Granted, if you leaving shit alone for more than 5 seconds, you’ll soon learn to just let them fire, but it got me to curse at my screen a second. But for $1.99 on the app store, this game is worth picking up!

Want to try 4 the King yourself before buying just to see if I am full of shit?  Play a free demo on Newgrounds or Kongregate, ya jerk!