A Story about my Uncle is the story about how your uncle transforms you into a technological spiderman/rocket knight hybrid. But after playing this game for two and a half days, I realize that this was probably meant to be a little longer.  Exhilarating gameplay, story-driven exploration and a tender touch are what makes this game unique.  So that works to force you through the game faster than you might expect.  But what makes it fun it its blatant disregard for the safety of children and a solid understanding and complete dismissal of physics.  It almost feels like this game was made to showcase the physics engine.  Either way,  Newtown’s laws of Motion shall claim their vengeance!

So you start this game and you hear a father putting his daughter to bed with a story.  She won’t go to freaking sleep, so we have to play the game to make her.  Whatever.  Turns out that the father is your character and you are playing as his former childhood self.  You go to his uncle’s house only to find it empty.  As you look around, he tells his daughter about all the things he remembers that day.  Looking at maps, postcards, exploration suit that lets you fly through the air like a genie, teleportation pad that you use to travel to another world.  You know.  The usual.

Then you flip a switch and travel to a world with floating platforms everywhere.  After using your grappling hook to navigate some simple platforms, you get another crystal core for your suit and shit gets tougher.  You also see these frog people, which is cool, but they are really just a part of the scenery.  You meet one named Maddie, and she spends a lot of the game on your back, keeping you company, making side comments and occasionally taunting you.  My character says he wants to be careful not to bump her head, but I would be struggling not to whack her head on a rock purposely.  It’s ok, though, mostly she helps you keep from feeling like you’re playing Portal again.  Solitary, silent protagonist taunted and forced through a treacherous terrain.  Here, you are a winsome protagonist listening to the discussion between a father and daughter with frequent input form your travelling partner.  There is the matter of a couple turns of phrase that come out a little awkward, but those are so minuscule I doubt anyone but me will even notice that shit.

Eventually Maddie leaves you, and I have to admit that I missed her toward the end.  The most of this game is the nail-biting manner in which you travel from one point to another.  I am not a puzzle-game guy, but this was fun as shit.  Sometimes you can choose any of a number ways to travel toward your destination.  There are also little machines that you find, and you take their readouts, but nothing much is mentioned about them toward the end.  They aren’t easy to find, but getting to them is their own reward.  I couldn’t help but feeling a bit of excitement every time I landed with a satisfying crunch.  And with all the hang time you get while swinging by a glowing thread of energy, you sure have plenty of time to weigh the choices in your life that led you here. 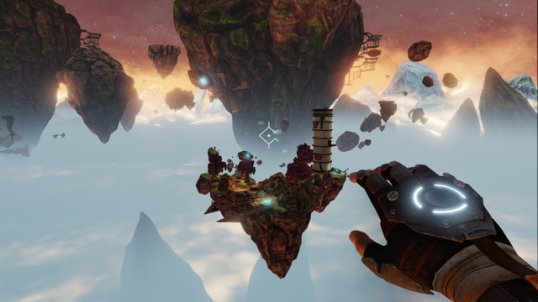 Another thing about this game is that you get a remarkable amount of upgrades.  Once you get the rocket boots, you are pretty much all set, though.  And another thing that this game seems to excel at is giving you awesome powers, allowing you to get used to them and then throwing insane obstacles at you.  O, you just got a handle on that grappling hook?  Good, here is a series of orbiting flying rocks to navigate!  You just got that long jump?  Ok, use your tractor beam to catch a rock at the end of your reach mid air after performing a long jump!  I almost shit myself a million times, but death in this game is more a relief from the white-knuckle feeling of flying through the air.  It’s not nearly as jarring as you expect falling from soaring heights into misty and uncertain depths should be.  That is good too, cause you’ll probably fall a few times.  That made it easy for me to feel like I wasn’t failing so much as learning what I needed to continue.  The game doesn’t make you feel like an asshole.  It just picks you up, dusts you off and says, that’s ok, we’re just having fun.  Not quite art, but definitely a cut above your standard game.

So what bothers me so much about this game? The FEELINGS!  I mean, it’s sooooo cute!  You’re a kid looking for his uncle!  Adorable!  Even though the guy made a suit for you, something that places you in a remarkable amount of danger. Blatant disregard for your safety!  And then!  O, the way you let Maddie go off on her own?  And the ending? AH!  Fuck you Gone North Games!  Fuck you for making me… feel for the characters.  O, well.  Time to go back to the standard thoughtless murder of hordes of flat enemies that is standard fare for games these days.