TerraTech is a game full of potential, which will be appearing at E3 2014, and I am hoping at IndE3 as well!  It is a solid concept built from the dirt up in Unity3D, and, of course, this game is an Alpha Demo, so please leave the screenies alone.  They were on the highest possible graphics setting.

TerraTech is like a combination of lego and erector sets where you start with a few simple pieces.  You gain more pieces by roving the surface of the alien world mercilessly destroying the cockpits of other vehicles.  In the beginning you have your cockpit, a body piece, a machinegun and some wheels.  The pieces are dropped on you like, fuck, here, whatever.  I laughed.  So I am driving around and I see some asshole with a couple wheels and a drill.  So, I naturally did the first thing you do when meeting other people: level your machinegun and prepare for battle.  After nuking his cockpit and leaving their corpses exposed to the extra-terrestrial atmosphere, I took their drill, which I affixed with a blue building beam (Psh, I ain’t fucking going out there!).  And I went off to drill some rocks.  After some drilling and a few battles, I realized that a tractor beam piece was used to pick up raw materials and parts.  Now I am that guy driving around with a whirling ball of resources and parts just chillin’ there, not in any kind of use.  Then I killed an automaton and found an AI interface.  Pretty useful.  That let me make an AI that would drive into trees and turn a little bit when fired at.  Eventually I saw this big asshole that had some neat yellow parts I wanted, so I killed him and took his pieces.  I am now the lord of the big alien world.  That is until some dick drives up out of nowhere and levels me, scattering my parts everywhere. 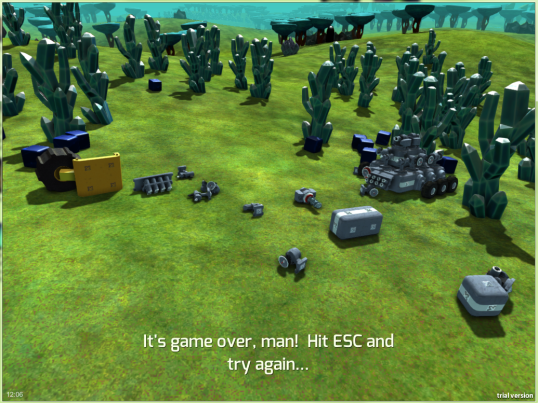 I was not unreasonably frustrated, so I went on to see what else this little demo had in store.  Turns out there are some other really nifty modes for this game.  The first I saw was Rocket Mode.  That sounded badass as hell, so I clicked it.  I was greeted by an orange desert and what looked like a two year old overturning a giant bucket of legos.  My eyes instantly lit up like fireworks and I went to town, baby!  When I was a kid, my parents wouldn’t allow us to have legos for two reasons.  I have 4 brothers and that shit is fucking EXPENSIVE.  Not to mention we scattered toys with impunity, and my mom did not want to fall victim to the natural predator of bare feet – lego blocks.

This mode is a ton of fun.  They dump out a ton of blocks and say “have fun!” like a dismissive parent that just wants to watch football in peace.  I am happy to let him go, cause I have some wings, there are repulsors, some wheels ( those are remarkably important for a flying vehicle I find ) rockets and rockets and rockets and fuel tanks and rockets.  Now, they give you some advice.  Don’t put too many fuel tanks on or it will be too heavy to fly.  I nodded absently and started throwing things on like a kid on Christmas.  After about twenty minutes of sorting through the disheveled heap I cobbled together what I thought seemed a craft fit for flight.

To the moon! Won’t be tough since we start on Mars, methinks. Mars has less atmosphere so.. ah fuck it..

I know right?  Badass!  Upon finishing I hit shift and let it rip!  And it flew like a broken-legged seagull that ate a rock.  It was funny as hell though!  It dragged through the sand, did a backflip.  I imagine the little engineer inside must have gone to Space Camp as a kid, gone to Space College and even manned the centrifuge only to end upside down in the orange sand like “This is what I’ve become”.  LoL!  This was a difficult task, though.  I tried a few times and still could not get it right.  This is why I am not a goddamn engineer.

After my aeronautical failure I turned to Checkpoint Mode.  Again I was greeted by the joy-inspiring avalanche of blocks.  This time I noticed two GIANT sets of wheels.  This opportunity would not go unaddressed.  I immediately set to work placing my cockpit atop a massive yellow block with giant wheels and covered it with as many fuel tanks as I could get.  I would need them.  For propulsion I covered the backend of this baby in as much fuck rocket engines as baby-Jesus could pour from the heavens, and thus did I rock most righteously.  Immediately I flipped on the CD player, popped in some Hendrix, closed the blast shield on my helmet and engaged. 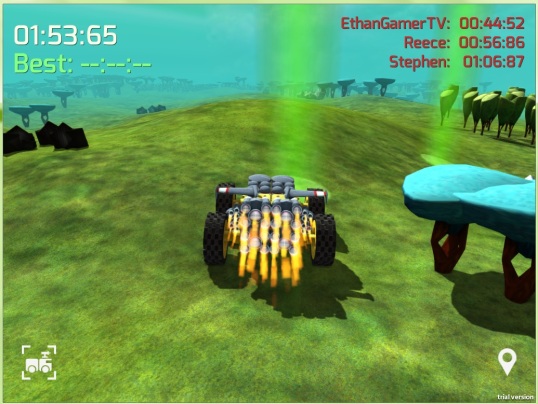 ‘Scuse me while I kiss the sky!

I threw the wings on there because fuck you it looks awesome. Ha ha ha!  I enjoyed the hell out of this mode.  Granted, steering this beast was like trying to turn the Titanic by paddling with Q-tip, but I didn’t have to worry about trees!  I just hit the nitro and flattened the fuckers!  Rocks, on the other hand, still provided a challenge, and as you can see Ethan, Reece and Stephen did not feel threatened.  That’s ok, though.  My rig would probably blow right through whatever dainty little maneuvering craft they made.  I bet they used the tiny baby wheels, too. Heh heh.

So what about this game pisses me off? I’ll tell you!  The rockets!  I need more fucking rockets!  Seriously!  I could have gotten at least thirty more megatons of propulsive force on the back of that baby!  The opportunities I missed!  Ah, well.  This is an alpha mode, so I bet the Devs are preparing a mode for me where I have to attach as many rockets as possible to the back of a cockpit with wheels.  Then I can launch it into the horizon!