Essentially, it is 8 turns of mayhem during which you have to use several races to get you as much money as possible.  Apparently all the creatures and peoples of this mythical land worship the same god: The God of Gold.  I mean, you control numerous people across the ages and collect coins at the end of each turn.  The winner has the most coins by the end.  So, yes, ultimately it is a game about collecting more coins than two italian plumbers before the timer runs out.

First turn you pick a race, and each race comes with a little prefix.  These can be things like hill, mountain, seafaring, imperial, diplomatic, etc. And each of these prefixes adds a special feature to the race to which it is affixed.  Each race naturally has a special ability, so adding the two together can either seriously enhance or considerably weaken the clout of each race combo.  This is honestly the biggest source of laughs and chuckles this game has to offer.  When you get combos like beserk leprechauns or dragon-riding pygmies, you know there is something wrong with the world in that demented hilarity kind of way.  Like sucking someone’s brains out with a swirly straw.

My first race combo was Spirit Humans.  Humans just get you one extra gold for each farmland they end the turn holding.  The spirit prefix makes it so that they add one race to the number you have in decline.  What is decline?  Well, I am glad you asked!  You know how every absurdly arrogant prick you know has the same book about the rise and fall of the roman empire on his bookshelf?  Well, this is the only game that gives that guy a semi-reasonable segue to bring up that book.  As an empire rises, so, too, must it fall.  When your empire goes into decline, the army tokens flip over and extras are removed from the board.  Going into decline is useful and necessary.  In an average session of Smallworld 2 you will have 3 – 4 empires.  You will still receive 1 coin for each region held by a race in decline and you can have only 1 race in decline at a time.  Unless you had a spirit race.  Then you can have 2.  That makes it a pretty useful little prefix to keep an eye out for. 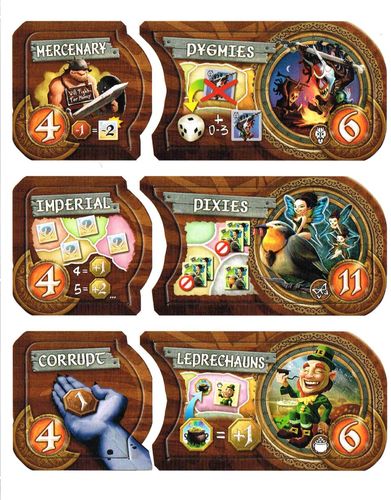 Damned imperial pixies with their Death Star! There is no way to beat that shit!

You may have noticed that each prefix and race has a number on it.  Totaled together, those numbers indicate how many armies your race will start with at the beginning of its turn.  Each turn your race will start from an edge and battle its way inland until it is no longer an effective way of doing business.  At the beginning of each turn, generally speaking, you will get additional forces in the number of regions you possess with a given race.  So, right off the bat, playing a race for more than 2 turns is a bad idea, unless it really isn’t.

On the topic of beserk leprechauns, that was my second race.  They cut a bloody swath through the territories of the battle dwarfs and skirted around my former spirit humans.  Leprechauns also have the added benefit of getting a pot ‘o’ gold on each region they own and, upon entering decline, each pot ‘o’ gold counts as 1 coin.  Unless some asshole cuts a fucking path through your territory with his stupid ass hill vampires.  Lame as fuck.  He got 1 coin for each pot ‘o’ gold he captured.  Same with the underground amazons.  Bitches… 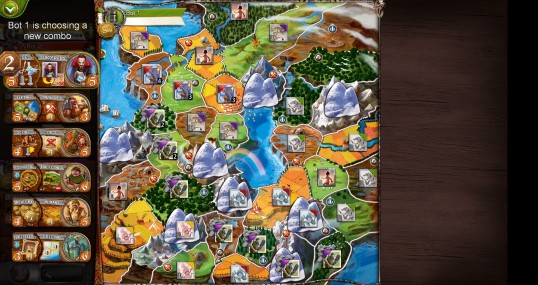 Flying Dwarfs. Isn’t the idea the same if you exchange ‘dwarves’ for ‘lead’? Nevermind. Lead is less stinky, less hairy and less alcoholic.

Fun to kill some time.  And BOY do you have options on that note.  I mean, you can watch the bots take their turns.  I did once or twice.  Then I found the ‘FUCK IT I HAVE A LIFE’ skip button.  Then again, if you find yourself on your computer playing a board game by yourself you have the special kind of issues.  Of course, this game has DLC’s which do exactly what an expansion pack for a board game would do: add more pieces to a game with way too fucking many pieces already.  Luckily this is a virtual board game, which leads me to speculate this was the reason for making it a video game.  You can find this title on Steam for 14.99$, the DLC’s total up at 10.97$ altogether.  My special thanks to The Dead Sparticus for cluing me in!  I guess I get so steamed up that I occasionally forget to mention where to get the fucking game!

Among the things that fucking anger me the most in this game nothing.. NOTHING angers me more than the fact that they have to put MOUNTAIN TILES on the MOUNTAIN REGIONS!  They did this in the fucking board game too!  Seriously!  Like, it is a picture of mountains with a mountain tile made specially to display it is a mountain.  And does this mean that no one can traverse this ever so superfluous terrain additive? NO! It just takes MORE FUCKING PEOPLE to take that shit!  It is almost like those assholes over at Days of Wonder are trying to make trees a thing of the past or laminated cardboard into a new currency standard. GAH! I’m just going to leave this here..