So this is what it’s come down to.  Viscera Clean-Up detail is a glorified janitor simulator in early access, but don’t close the screen yet.  You’re not exactly wiping some kid’s puke up off a tile floor or mopping up piss.  You are the guy that cleans up after the events of other video games and tragic events, but this seems to be made by a people who are disenfranchised with the world in general and are used to monotonous, soul-crush jobs.  Like the British.

Ultimately, this game is just like building a puzzle.  You are given a big mess to organize, and piece by piece you work the mess down to an easily manageable pile and then finish up.  Now, starting this game is a bit of a chore.  You begin and blood and guts litter the floor, are painted on the walls and the entire scene is a very “modern art in rouge.”  You have several very fucking important machines that help you get your job done.  First, there is the Slosh-o-Matic, dispenser of buckets full of water.  Then there is the furnace, it is the disposal method of choice for viscera both human and alien.  Then there is the What-a-Load container machine, which disposes containers marked with the “biological hazard” symbol.  And finally, the vending machine, which provides access to all manner of useful objects.

This game provides the all-too-realistic experience of being a janitor fitted with the cheapest mechanism for cleaning available in futuristic times.  By all accounts, you should have access to a fucking auto-cleaning zapper mechanism!  But the most high-tech device you have is the Muck-Guyver, which provides a radar “ping” that beeps faster and in a higher pitch the closer you are to a “mess.”  Way too many times have I finished cleaning up a section of a room littered with the remains of a scientist, used the Muck-Guyver and the region still came up hot.  I look on the ceiling and curse the gods, realizing that the some of a victim didn’t fucking reach the floor.  At which point you have to stack a bunch of boxes, or whatever environmental detritus you have available, and scrub the goddamned ceiling!

Your main “weapon” is a mop, so the Slosh-o-Matic isn’t just a funny little feature.  It is your main support element.  And don’t even think for five fucking seconds that this shit is all user-fucking-friendly!  Every time you hit the dispense button, there is a shot you will get a bloody body part instead of a bucket of clean.  This means it will drop out and splatter fresh blood all over the ground and the machine.  I like to imagine that this is because the machine is really a teleporter, and a careless technician just lost an arm or something.  A slosh-o-matic is necessary, though, as your mop gets dirty through usage.  You can only mop a heavily-soiled section of the floor for five mouse-clicks before you start just spreading the muck around, so you have to get a fresh mop bucket and rinse the mop.  One dunk only, though!  Your mop buckets will get soiled, too!  Dunk your mop in that and you will just be smearing a fine paste over surfaces leaving a trail like a snail on its period.  And watch your goddamned step!  Knock over a bucket containing ANY level of grime, and you will have just poured out a mess all over the floor again.  Prepare for agony.  My wife came in worried about me only to find I knocked over another fucking mop bucket! 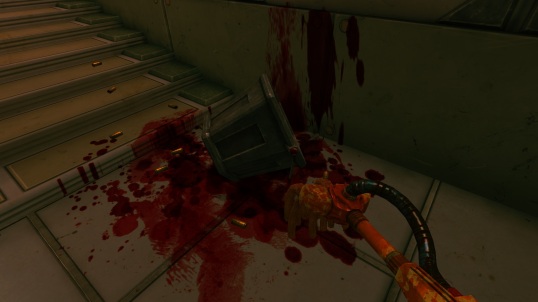 Dirty mop? Spilled bucket? This might end with suicide.

If your buckets get dirty, too, how the fuck are you supposed to clean for a protracted period of time?  In this space-age setting your company has resorted to the most sensible and fiscally responsible means of disposing of things: setting them on fire.  Apparently the Joker was right, everything does burn!  Even steel buckets full of fucking water!  Now, this is a little silly, but once you have mopped up enough blood and such to get to the bullet cartridges and organs lying in the open, how can you get them to the furnace reliably?  Why, you simply put someone’s assorted remains into a yellow bio-hazard bin and burn them, of course!  Bins are pretty sizable, too, and seating most of two people comfortably.  But be fucking mindful of your goddamned surroundings!  Have a bloody stub sticking out of the bin?  You will smear blood on anything it might touch.  Considering the fact that doors in this don’t open wide, you will end up scrubbing walls and doors a lot, too.  And don’t be that manly man that has to cram eight people, a thousand bullet cartridges, five soiled knives and a take-out box into one fucking disposal bin.  That shit will cost you!  Things inside the bin will get heavy for you and you will drop that shit.  Even if the bin isn’t that fucking full and you are hitting shift to go slowly!  Run with organs and you might as well paint everything red.

One thing that this game encapsulates entirely too fucking well is frustratingly tedious tasks.  So you have disposal bins, eh?  Here is a floor littered with a bazillion mother-fucking bullet cartridges.  Pick them up one at a time.  Scientists in this ripped apart by a blood-thirty alien?  Intestines will be scattered around like someone spilled oodles of noodles and you have to pick it up one greasy meat-tube at a time.  Then there are the distances they go to make this a challenge.  Aside from organs pouring out of the bin or bucket dispensers, should you step in a pool of blood, you will track blood everywhere across mom’s new carpet.  There is nothing more frustrating than realizing you just tracked somone’s DNA across your freshly-mopped floors.  And then there is the detail!  Yea, sure, anybody can scrub a few tiles and punch out, but if you just run through and opt-out of spot-checking your work with the Muck-Guyver, you’ll miss something.  One element I discovered was that sometimes blood will run into the fucking grout in the tiles!  And you’ll have to scrub that separately from the rest of the pool!  I am just grateful they don’t force you to go in there with a brush and scrub it out by hand.  Holy fuck! 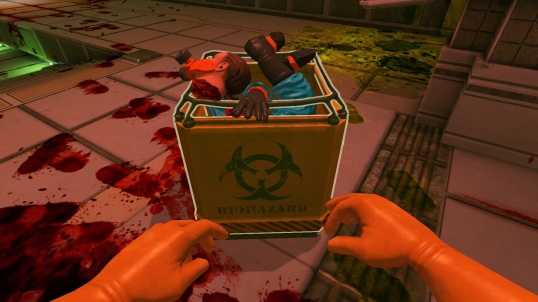 Spacious enough to fit the extremities of several researchers comfortably!

Cleaning up the organs or dead researchers is only the fun part of the job, though.  You’ll find yourself cleaning up crumpled papers, soda cans and other office debris.  There are also other menial tasks to achieve, such as refilling wall-mounted medkits.  I mean, what research facility is complete without the easily-accessible medkit designed for dressing alien claw-wounds?  To this end, the vending machine is a must.  Of course, not all facilities are outfitted in anticipation of epic fight-scenes.  Some places are just dimly-lit and have naturally dingy textures.  In such situations, the vending machine will provide lanterns!  Of course, knock these fuckers over too many times and they explode leaving scorch marks all over the floor.  Vending machines will also offer any number of useless shit, such as pizza slicers and “wet floor” signs.  Granted, I think you get docked points if you don’t put down the signs, so yea.

This game isn’t without its flaws.  Sometimes you’ll have an arm that will get jostled so bad in a disposal bin that it clips through the bin, painting anything it touches.  The bins are the source of a number of issues, as over-stocking the bins causes things to jump around in there like a bunch of nitrogen atoms under pressure.  I also found these strange “phantom pegs” that appear on the electrical cords for your appliances.  At first you might not see them, but if you splatter blood on them, they show up, sometimes only partially. 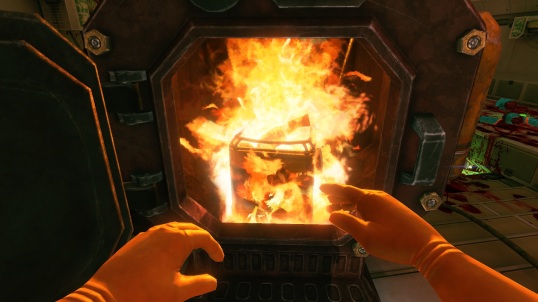 I guess this is more respectful than just dumping it all in the garbage somewhere.

Aside from being the type of game a serial killer would jack off to, the most irritating thing about it is.. uh.. well I’ll tell you after I spend another 3 hours scrubbing out the toilets and transferring the wasted toilet paper left on the floor to a disposal bin.  Yea, it really is that much fun.  What kind of psychopath has fun in this, do you ask?  Anyone who gets satisfaction out of gradually turning a hopeless situation into an operational facility ready for the next batch of squishy and ethically-irresponsible researchers.