So I wiped out 99% of humanity today and still fucking lost!  Plague Inc: Evolved is a game for the strategic mastermind in all of us.  Take control of an infectious disease, evolve and kill everyone ever known by everyone you’ve ever known.

This title starts out simple enough, but gives you an idea of the scope you are dealing with in order to get there.  Initially you can only control a bacteria, but later organisms include prions, viruses, nano-viruses parasites fungi and some things I have never fucking heard of.  You then name your virus.  In prior Plague Inc titles (previously known as Pandemic) I always named my disease something insidious sounding like Writhing Death or The Manacles.  I lost every time.  So one day I made a disease named Booty Shoe out of denominational ennui.  Booty shoe eradicated the world population.  So this one got to be Nut Slipper.  I started Nut Slipper out in Indonesia, and altogether solid start location for any disease.  It has ports for oceanic export, planes for aerial export and it’s a warm, moist climate, which puts it two evolutions away from stepping out into the greater world.  Plague Inc seems to have 3 phases of play.  It’s not actually a part of the game, but the way the flow of the game seems to develop.  I call these phases initial spawn, transmission and eradication.  In initial spawn, you get DNA points for evolution from a few gameplay milestones in the beginning.  This is where your disease starts in its natal region and starts to breed.  When you spread out little by little to people in your starting country, Indonesia in this case, you’ll see little red and orange bubbles appear.  Pop these for the DNA points to evolve your disease. 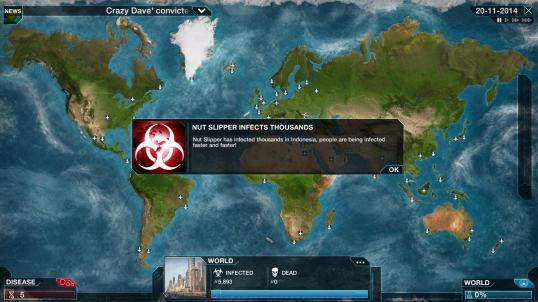 Thousands of nuts are apparently warm and cozy. Why is this bad?

In Plague Inc, you don’t order your little bacteria where you want them.  Consider the game a simulation of the spread of a potential disease.  Your disease will spread on its own in an organic fashion across the various methods.  You control the disease by mutating it, granting it new characteristics along the way.  These characteristics fall into three categories: transmission, abilities and symptoms.  Transmission is how the disease is carried from one host to another.  These can be things like livestock, insects, air, water etc.  Being in Indonesia, I evolved air and water right away.  Now, the game also made it so that transmission via water would be hard off the bat for my disease.  Something about sanitizing boats.  But evolving that water transmission negated the effect.  Nothing would stop Nut Slipper from sailing the seven seas!  This brings us to where you are spreading to every country in the transmission phase.  You get DNA points for spreading to new countries and infecting large portions of the population.  People don’t need to know you are around yet, but you get the DNA points for infections.

Now one of the things that you get concerned about really fast is how well your disease spreads to other countries.  Does it like the climate?  How rapidly does it spread? Do they use class 3 or 4 antibiotics?  All legitimate concerns.  It used to be that getting your disease into Madagascar was a sure-fire win, but now fully infecting Greenland, Canada and other cold-climate countries is the true challenge.  Your disease will spread the slowest in these locations and if you get lethal too soon, you’ll kill the hosts before they can spread it to other people.  That is a no-go. 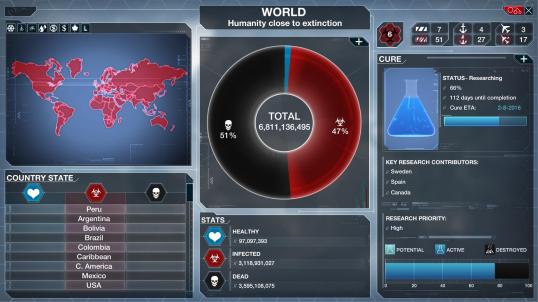 Only fifty-one percent of the world population is dead!? Time to step up my game.

Once you have enough people eating, drinking and breathing in your disease it’s time to start the extinction of humanity!  This is my favorite part because once people start dying the music, which has sinister techno-ambiance, goes from ominous to downright fucking creepy.  It starts off with the EKG heart monitor noises woven into it just below audibility and the moves on to include some kind of sirens.  I think they might be the noise that ambulances make in countries not mine.  Ours are pretty obnoxious.  Either way, it moves on to people hacking and coughing and children singing ring around the rosey.  Awesome, ambient and creepy as fuck.

Now the extinction of humanity won’t be reached by making your disease resistant and transmissible alone, and this is where it gets tough.  In the eradication phase you get DNA points for wiping out populations and destabilizing governments.  Symptoms are the method for reaching these goals.  If you take symptoms too early in the transmission phase, your disease will be detected and cured fairly rapidly.  Take symptoms too late and you will not have enough points to develop the truly lethal symptoms.  Occasionally you will spawn random symptoms, but the game can be paused in order to devolve those and earn some DNA points.  With your bacteria, you want to aim for 70% – 79% of global infection to start taking symptoms, and when you take them take them fucking hard.  When I pump up the symptoms I will take them 3 – 4 at a time and let them go.  People start dropping dead faster than the game even knows how to react, and by the time the first death hits the news, hundreds of thousands are lying in their living rooms clinging fecklessly to their last breaths.  Even with Nut Slipper taking the world by storm, I was still greeted with this fucking screen at the end. 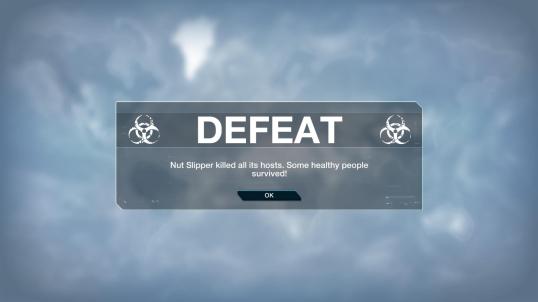 I am only partially joking about that, too.  I wiped out 99.9% of humanity and it was still not considered a fucking victory!  To give you an idea, the people who survived lived in Greenland, Canada, Italy and Sweden.  Everyone else in the entire fucking world was dead.  My problem was that I took symptoms around 65% world infection and killed all my hosts too fast.  I have no fucking clue how Italy, of all goddamn places, fucking survived, either.  I guess they didn’t go to the Olympics in London that year…   Granted none of them survived unscathed, but they survived.  One of the more fun features of this game is how you can make spectacular effects occur, like projectile vomiting, by combining various symptoms.  Projectile vomiting occurs when you have coughing and vomiting at the same time.  Once you have started to wipe out the population of planet Earth, people will start to do research in an attempt to survive.  This is signified by a blue plane that flies around.  You can slow them down by clicking little blue bubbles, too, but the best part is when you stop research by killing everyone in a country.  Then the country just goes dark as everyone slowly collapses.  This game is a tough one, but rewarding for the strategic enthusiast.  It can be gotten for 14.99$ on Steam and.. wait this is early access?  Well for an early access game, this one sure is well done.  Worth the money, in my honest opinion.  It also feels like one of those games that some people think might save the world by thinking about how to solve realistic problems, except in this one you are the problem.

Of all the things this game does right, there is one thing that still haunts my dreams.  The children.  When you start to go nuclear, as stated, you hear a group of grade-school children singing Ring around the Rosey.  I swear to fucking god this is the creepiest thing I have ever fucking heard in ever.  It is like the children of the corn, or some shit.  The music is fucking awesome, mind you.  That just enhances how creepy the children are.  They are like the fucking harbingers of the goddamn apocalypse!  I will be waking up in a cold sweat singing ring around the rosey tonight, I just know it.