I swear to fucking god, if I play another goddamn sandbox again it will be all my fault, because I like sandboxes way too much.  Granted, last week was the unofficial “week of sandboxes” for me, so I am getting some time in with something more violent after this.  For now, this was a game that persisted in surprising the fuck out of me.  Seriously.  Every time I thought I had gotten to the furthest extent of content in this game, I got hit with more.  It isn’t listed as a pre-release title on Steam, but the devs are still adding content, Terraria-style, so it must be an Early Release.  Either way, this game could have fucking fooled me, because it has more flesh than my own personal ass post-Thanksgiving.

When you load it up, you are in the middle of tabula rasa, a clean slate just waiting for creativity.  One of the first things I noticed was how pretty the UI is.  I mean LOOK at it!  It has everything necessary for an RPG and a sandbox while having some high-speed options for quick-paced combat, and it plays well, too.  It focal feature is a little mode-toggle that is wedged between the hotbar and mana bar like my brother’s face in a dancer’s boobies at a strip joint.  Hit that baby and you go from fun-times-with-Mr-Rodgers sandbox to fuck-me-in-the face Hack ‘n’ Slash.  No joke.  Everything is pretty colorful, beautifully detailed world and a skillful procedural generation that somehow hides itself at first, but that button flips half your menu into blood-stained weapon of death! 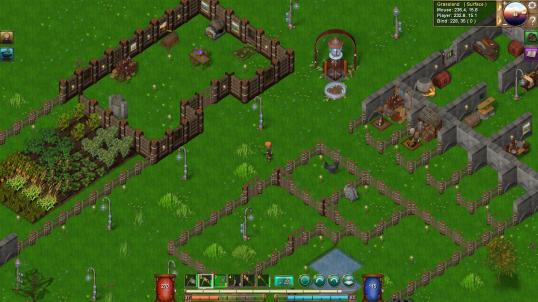 It’s a beautiful day in the neighborhood, mother fucker.

Take a gander around and you will notice that my house, the log building, and the workshop, the stone building with castle walls, have no floors.  One of the perks of a (sort of) pre-release.  That is ok, though.  And here is why.  Above you can see a fraction of what is possible in ths game, attained in about a full day of gaming.  You can build houses that are basically walls, windows and doors.  Your bed is the binding point where you respawn after death, and incidentally a time-warping machine of the future.  When you sleep, night turns into day, but it looks like you just walk over and look at the bed as time changes.  Given another efficiency feature of the game, you can do this through walls.  This feature is one of the elements of the sandbox.

Next to the blue toggle are four buttons.  The first makes visible your character’s range of influence, which is how far away you can touch things.  Educated guess puts this distance at about 10 fucking feet.  This guy rivals Garrett in the “characters with the longest arms” category, but again, this makes things like harvesting a grove of trees easy, so you can avoid being at dick-distance from each tree to cut it.  At first I thought I found a glitch, but then I stared to look over the buttons, and it all made sense.  The next two buttons say they rotate objects before you place them, but don’t be deceived by this low-down, dirty deceiver; it actually morphs the physical form of items being placed.  For instance, a log fence could become a single section, a corner of fence or  just a goddamn post.  Test this out with various items as the results are titillating.  Last is the sub-subterranean article induction rectifying selector or the STAIRS button because the only fucking thing you place between levels are the stairs!  I mean, if you want to get down to the shrieking charnelhouse of nightmares that is the underground, you’ll need to take the stairs.  Press the mode-toggle before you go, though, as you can’t fight in placement mode. 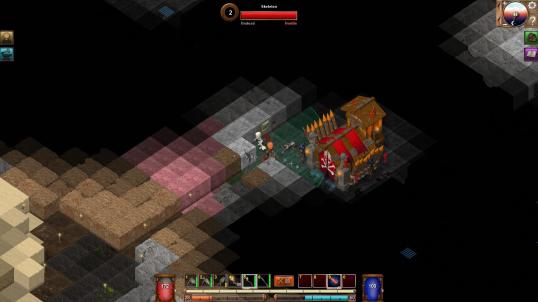 Blizzard called, they want their mercenary camp back

Granted, before you venture in the dark abyss that lies beneath, you’ll want good gear.  You can craft a wide range of items from the beginning, but the items you may craft are limited to what you can pick up off the ground.  And by “pick up off the ground” I really mean “beat into submission with your bare hands” as the animation seems to display.  Still, you can get loose stones, sticks (which are in fucking everything), logs and food on the surface, and the list goes on.  You can feasibly get a few levels before needing to venture downward, especially since it feels like there is an entire game up top.  Eventually you will want to make stairs down.  Now if you start near stairs, DON’T FUCKING GO DOWN THERE!  I did and I got my ass torn open by goblins.  Luckily the animation just has you pulse into nothing in a flash of light, presumably as Scotty beams you back to the Enterpr.. I MEAN.. your bed.  Building your own staircase is likely to lead down to a single claustrophobic space where you claw your way through the walls for air.. or you could just craft a stone pick and dig your way out, fucking lunatic.  Down here on the first level you can find copper, albeit sparsely populated, which will get you the necessary components for some workbenches.  Materials increase in availability the deeper you go, too, but so does difficulty.  Eventually you need to go down, but be prepared when you do and craft yourself some solid gear on a workbench.

Imagine there are half a thousand artistically detailed workbenches in this game, each with their own function and an impressive array of craftable items and you’ll be imagining… uh.. this game.  I even found a workbench that uses workbenches as crafting components.  It gets intense, but as you need to go deeper, so too do you need to get crafty.  My first workbench helped me combat my hunger bar through agriculture.  The gardening workbench lets you use fruits and flowers to make seeds and potted plants.  Now many things in Lantern Forge also have numerous uses: food-bearing plants can be turned into seeds, sticks are in fucking everything and stones are always useful.  It pays to never throw anything away, so it is a good thing there are as many types of chests as there are types of crafting materials.  Granted, eventually you will have more stuff than you know what to do with, so one really cool mechanic among the pile of awesome elements in this game is the Town Center.  The Town Center is that giant ominous lantern over a bottomless pit in the first screenshot.  This uses workbenches to craft shops that are associated to the functions of those workbenches.  Over-simplified example: a gardening workbench lets you build the farming supply shop.  This can then be placed to buy food, tools, seeds and plants for farming.  The best part is the shopkeepers rotate their stock, so the items in there always change as you play.  Honestly, I am not sure what Hearthfire Studios is trying to pull, but my brain almost exploded with all the shit there is to do in this game.

What Seuss-Lovecraftian nightmare did I just acid trip into?!

Just when you think you have seen it all, they come up with this shit.  A giant haunted dollhouse in the middle of a pink and purple field spewing out knitted doll-beasts that chase you into the next fucking biome.  Great.  Combat is pretty tough at first, but as you get higher in level and secure a handle on it, it becomes manageable.  You have three combat trees to pour skill points into: hunter for ranged, knight for melee and mage for magic.  They also threw in an adventurer tree and filled it with a variety of passive abilities that make exploration, sandboxing and everything in the fucking game better in general.  On the surface, you are less likely to run into enemies, unless you are a stupid screenshotting asshole that runs into the weirdest shit possible and takes pictures while evil dolls poke him with giant needles.  Yea, that’s me.  At night, however, the forest becomes populated with all sorts of enemies.  That’s why gear can really be important.  While you can only make stone tools at first, eventually you will get to iron and mithril.  These items are, in turn, used to get even more items which can open up new varieties of craftable items, both practical and cosmetic.

Everything about this game is fun.  The art and music work symbiotically to generate the ambiance of this game: colorful and bright at first glance, but as night falls, things get dark and ominous.  And at first, it feels like a winsome frolic in an idyllic land, but as you get deeper and deeper, you will realize there is really more to it.  To give you an idea, I was playing this game for nearly a full 24 hours and still only got to the second tier of technology, crafting in copper.  Granted, I like to really explore things, so I was going all out and getting loot, farming, cooking, crafting and making a town.  This game is gradual sandbox gameplay combined with challenging combat, which spikes in difficulty to keep you on your toes.  Overall, this game is worth every cent of the 9.99$ asking price on Steam and is a lot of fun for those with this taste.  It splices two genres into a coherent and instant-switch whole that holds its own on either mode.  I am not even a fan of anime, but this game’s subtle JRPG tones really bring out the lively feelings of this game and give it a unique flair that really entertains.  Even considering everything I have said about this game, there is still so much to explore and experience about it.  Play it yourself to see.  Thumbs up to the developers on this one; Lantern Forge deserves an adoring fanbase of its own.