Generally, I like to promote games from indies in need, but this is a story too deeply bizarre and intriguing to pass up.  Veterans of the AAA gaming industry have broken off and teamed up to create X-tactics (pronounced Cross Tactics), a game that will link gaming across mobile and PC platforms for an exciting blend.  Honestly, the anime art might not be my usual bag, but the concept behind this game is so vast and exciting that only the Japanese are crazy enough to do it right.  Ingress better watch out, shit’s about to get real.

First things first, who the fuck are these people?  Our developer in question, GAMKIN, is the product of minds from Square-Enix, Sega and Capcom.  Those names drop harder than Skrillex does his bass, but still it stands.  This is a game that will be rendered by veterans from three legendary household names in gaming.  Fuck.  These guys got together in late 2013 and they have spent most of their time in Japan away from the warm lights of our hemisphere.  Mostly they’ve been working with interactive children’s television and collaborating with local game schools to cultivate next-gen game devs.  So these guys are legit philanthropists with a serious mind for our future.  Now they turn their thoughts again toward gaming, and this beast, which they’ve gotten fully funded with 33 days left on their Indie GoGo clock, threatens some formidable levels of awesome.  For a little perspective, the campaign launched on the 8th.  This means they achieved their primary goal in just 6 days.

GAMKIN has a lot on their plate when you look at their plans.  The platforms they will be releasing on include iOS, Android, Kindle (2014), PC, Mac, Linux and Google Glass  (2015), and none of those are stretch goals.  The features of the game are complex and paint an exciting picture of gaming interaction.  First off, this is another genre-fusing game.  Its main components are tactics, fighting and urban exploration, with a 50%, 25% and 25% split, respectively.  In their own words:

When we set out to make X-Tactics we didn’t want to make just another tactical game, nor attempt to create some sort of perfect tactical game. Instead our goal as developers here is to create something new. We combined equal parts of tactical gameplay of classics like that of Final Fantasy Tactics and Valkyrie Chronicles, together with fighting game mechanics and aesthetics, like those found in the Street Fighter series, to create a new gameplay experience, that we at least have not seen done before.

Now this doesn’t explain the other 25% of the game, but let’s stop a minute what this means for PC gamers, as PC and MAC will be options for the game.  The game itself will use turn-based tactics to create a high-speed gameplay environment that focuses on treacherous close-quarters combat, as you might find in an urban setting.  Your heroes won’t be able to take ridiculous amounts of damage to the face, so you will need to make quick moves and calculated risks to achieve victory rapidly.  Failing to do so finds you at the business end of some purple alien’s psychic attacks…

… and that suit screams “business time”

Each battles takes up the full screen, and each mission will be comprised of several battles.  With one screen active fights will be tightly fought, so bonuses like flanking, support, destructible furnishings in the environment and traps will give you a serious edge and change the battle’s dynamics every time you play.  X-Tactics will also utilize an initiative system, which they compare to that of Final Fantasy Tactics, but I will translate that to the American readers: shit’s going to battle like DnD.  Initiative will be based on speed and turn order will be thereby determined.  This will also open up the ability for seasoned players to fine-tune their initiative-order to get their team members to unleash dual combos and team combos.  Not to mention, enemies will come in waves each battle, so you really have to get that ass in gear and wipe out your foes before more arrive!

What does this all mean for mobile users?  Honestly, this part looks to be the most exciting.  GAMKIN is going to use GPS information to create a variety of missions that will allow you to defend your neighborhood, school or workplace from outbreaks and other dangers.  Each character you have will even have locale-based storylines that will be unlocked depending on where you are, so the exploration is highly encouraged.  Where this game will really shine is how it will use the GPS of your device to investigate your surroundings, reveal hints and uncover treasures.  This will open up to more modular features where users can organize their own location-based events and treasure-hunts with friends.  In addition to all this, the game will be sensitive to the time of day, moon cycles and even weather to unlock events, initiate outbreaks and influence character abilities.  Having the mobile functionality will also allow for 4-player co-op missions, so you don’t have to be anti-social with this title.  And for those of you guys who shelled out the outrageous amounts of cash to join in on the googe Glass explorer program, the team will also have a companion app that will assist with the urban exploration part of the game.  If that isn’t enough, they will also be updating weekly with episodic content for the game, including missions, items and new heroes all at no cost to players.  If they throw in anything else, my brain might explode.

This is all well and good, but what is the fucking story here?  Well, it takes place in a story like our own, if our world was controlled by top-secret government agencies and secret societies.  It isn’t, right?  You’ll control a motley crew of secret agents, treasure hunters and adventurers that are working to keep the truth in check.  This means you are more “Men In Black”, less “defenders of the people”.  I expect we’ll likely be killing those free-minded liberators of information, and that makes me laugh with dark, dark relish (enjoyment, not condiment).  And the game is perfectly ok with this.  In fact, the creators have said that it will use dark humor and anime punk art styles to put a new spin on conspiracy theories and urban legends!

And this got funded seemingly over night.  I have known about this game for four days, and it has already gotten its Indie GoGo funding, and they are into stretch goals.  Literally, they got a money enema.  They have 6 hunters with 2 more listed for stretch goals, including some badass ninja panda and a thick list of additional concepts.  Go and check it out for yourself, and wait with bated breath for the release!  Congratulations to these guys for getting their funding goals!  Now get in there and see if we can help them meet a few more stretch goals! 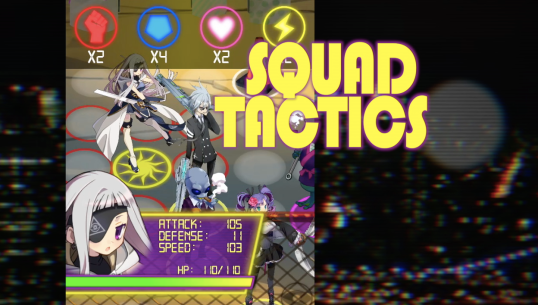