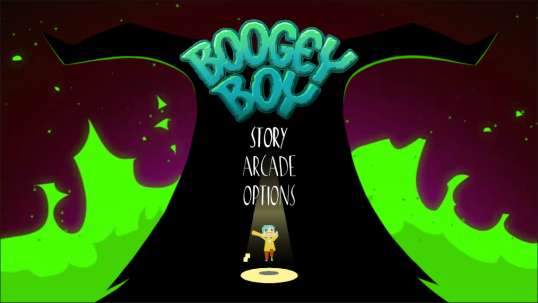 You know that dream where you are running and running, then suddenly you look back and there is a giant black demon horse chasing you? Goon Studios made a game about that and it is not nearly as terrifying as the dream.  Frustrating at times, but still a lot of fun.  Granted, it’s not completed, so this game is a preview version, but the good news is you can play this preview, too, on Indie Database!  Don’t want to commit to the download?  here are my thoughts on it as it is so far.

You character is a kid in his dreams, which end up having the same exact mechanics as an endless runner, like Canabalt or Crazy Critter Dash.  Interesting that I should compare it to mobile games, since this little blue-haired fucker will be charging his way across PC monitors, Idevices and Androids.  As he runs, his arms flop behind him like he was dreaming about seducing an anesthesiologist prior to arm surgery, then the running started.  His art reminds me of a combination of Coraline, carrying some similarly creepy vibes, and Adventure Time.  Nothing on this fucking Earth would get me to watch that show, but the art looks similar from what I’ve seen on posters at the mall.  You are being chased by a rotating cast of silhouetted eldritch horrors across the terrain of your dreams.

If I was being chased by Cthulu’s drinking buddies, I would look like this too.

While you are running, there is the ground itself, which undulates wildly.  Stay on the ground and you’ll be dead in seconds, since the nightmares, I’ll call them, run fast, and you really don’t for the most part.  When they catch up to you, you roll under them like that guy in Ben Hur.  To avoid this, there are a number of floating platforms you can leap to.  Jumping is a lot of fun, and this kid is apparently the blood relative of an ancient ninja: he can double jump.  And his double jump is fucking fancy!  He’ll jump, then double jump and end it with a travolta.  It’s wild and fun, and the best part is that this game is fucking creative.  Sure, you have the usual platforms, floating pieces of road, clouds etc.  But there are also things like beds to bounce on.  As you might expect, this enhances your jump, which can already be enhanced by holding down the jump key.

But you have to move fast, since the nightmares toss platforms aside as they pass under them.  Of course, you don’t control your run so much as struggle to cope with it.  The only way to increase your run speed is to grab stars, which seem to make you speedier the more of them you have.  Much like other running-centric heroes, you will lose your shiny collectibles if hit by an enemy.  Enemies are pretty surreal, too.  They run the gamut from helicopters and frogs to cars with spring-loaded boxing gloves in them.  Most of these you can ‘defeat’ by jumping on them, but sometimes you can run along the top of them to escape.

Aside from stars, there is an array of powerups you can grab, and I have no idea what any of them do.  I will tell you, instead, what I do know about them.  The batteries you grab fill up your batter bar at the top of the screen, which makes me feel good when I get them.  I have not been able to fill it and posit that its effect would be known if I could get the third battery slotted.  Unfortunately, runners are not my natural habitat.  There is also a kid-style superhero cape, which seems to actually be a blanket. You can’t trample my dreams!  There are also dog, bubble, sister and teddy bear pickups.  See if you can uncover their secrets! 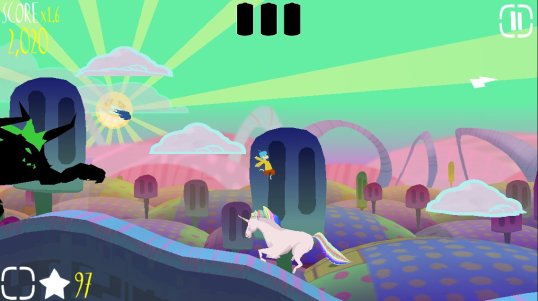 Jump on the magical unicorn to briefly escape a horrible death by trampling!

This is a really fun game.  I have only played a couple unfinished levels, and I am really interested in this title, despite my neutral emotions toward its genre.  Honestly, most of my love for Boogey Boy comes from the art.  The look is really dream-like and surreal:  enemies make a sort of vague sense, platforms are creative and neat.  Another thing is the music.  It leaps and frolics around with you while still leaning on you to keep up a solid pace or be stomped into dream dust.  The controls are simple and the UI is a bit random, but coherent.  Overall, I would be alright paying money for this game.  Its early stages of development generate their own ire, but it is to be expected at this point.  The most annoying thing about this title is the lack of fucking exit button on the menu.  There is also the issue of no pause menu’, so you only get the choice to return to the title menu, but even there you have no exit option.  Again, though most of that title menu is non-functional because this is an early early development preview!  Check it out, but don’t be judgmental.  It’s a great work-in-progress that deserves to have an eye kept on it.