When I was a kid, my friend would come over with a copy of Road Rash for Sega Genesis.  We’d race for hours while beating each other over the head with any number of clubbed and bladed implements.  Ah, the joys of youth!  It has been many years since and I hadn’t even heard the name of this spoken, and I had begun to wonder if it was ever real at all.  I played Twisted Metal on the Playstation and any number of other games that tried to emulate it, but none that tried to recreate the balls-to-the-wall motorcycle racing gauntlet that was Road Rash.  Then yesterday, it happened.  I heard of a projecton Kickstarter that was to emulate this game, and it had already reached its funding goal.  Its name was Road Redemption.

In this title, you will be playing a Katana-clad member of a mid-western America motorcycle gang.  You have to move your way up in the ranks and take control of drug trading routes.  It’s a visceral title that will actually hit harder than its spiritual predecessor.  Thing is, it won’t be made by the same people that made Road Rash.  In fact, a lot of these developers grew up playing games on the same systems I did, so they remember the good old days of games that make you earn their respect rather than the spoon-fed titles of today. 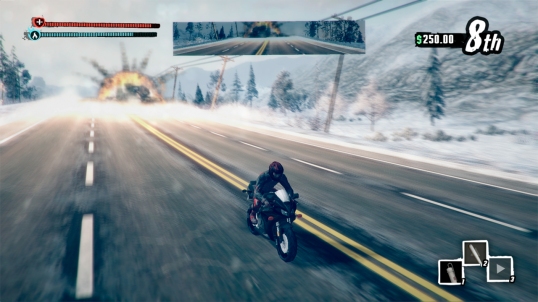 Who says real badasses never look back at an explosion?

This looks like a title that will take esports to an awesome new level and bring people away from their Xboxes and Call of Duty.  You’ll earn money by racing, sure, but if I can wield a shotgun on a motorcycle, why would I just want to race all the time?  Luckily there will also be assassinations, robberies and other challenges.  Getting the goods will allow you to level your character, buy better hardware and upgrade your bike so you can really take on the tough guys.

The storyline is a sort of made-in-America Mad Max routine.  You are part of stated motorcycle gang in post-apocalyptic mid-west America, and the country is run by a ruthless dictator.  You gang-leader decides that it would be a great idea to ride into the capital with the intent of killing the dictator.  I guess it doesn’t go too well, since the game description implies heavily that shit hits the fan for you and everyone you know.  You then have to track this guy down and, pending his judgment at the gang’s hands, decide what to do about the whole dictator situation.

One of the more vague features of this game comes with the life-system.  There will be no extra lives, but the experience, gear and upgrades you earn should stick with you.  What does this mean? Fuck if I know, but I guess you have a lot of family members who are willing to step up and take over your cause.  You’re probably from one of those massive Irish-Catholic families you see all over television.  What’s more is that multi-player mode will be all about you building your gang and then taking to the internet where you will join up with or against your friends.  Hey, competition is just as much fun as working together, sometimes.  Personally, I cannot wait to throw someone under a bus.. fucking literally!

The best part about all of this?  Road Redemption comes out tomorrow on Steam as Early Access.  So get those bike helmets ready.  We’re info for one hell of a ride.  Get ready for the best rash you’ve ever seen!