This game suffers from being viciously misnamed.  Hydrophilia would be closer to the mark, considering how much attention went into this game’s water physics.  It is just a shame that a game with so much potential fell flat on its socially-progressive pretenses and turned out to be just another bowl of meh pudding.  Seriously, it wasn’t astronomically bad, but it failed so badly at everything else it tried to do that its nothing worth mentioning in the history of gaming.  Then again with how advanced the water physics were in this game, you might liken it to a socially conscientious, non-bigoted Birth of a Nation: it might be a shit, but it is a shit that made powerful contributions to its discipline.  On the bright side, at least there was no one in black face.

So it isn’t so bad that it necessitates drawing a comparison to the most violently racist film in American history, and that is part of the problem.  Aside from the water physics there is nothing else truly worth mentioning.  First, let’s start positive, since there is so little to say here.  This entire game takes place on The Queen of the World, which makes legal doctrines difficult to read in this since there are so many titles and such.  Thing is, the Queen is a massive city-ship built to be humanity’s solution to over population: not enough space on land?  Fuck it, let’s live in the ocean.  Now that is really silly, but the thing is, the rest of the world likely isn’t happy about the wealthy elites retreating to the ocean to avoid looking at the dirty plebs everywhere.  So the ship gets taken over by this terrorist group called the Malthusians, named after Thomas Robert Malthus.  Apparently the guy was a demographic scholar back in the day.  I don’t think he would have gotten behind killing everyone on the ship, though.  Just sayin’

What a cheerful and artistic group of boys and girls…

Coming back to the point, though, the terrorists decide to start blowing holes in the floating city.  Not usually a great idea, but hey, they’re villains in a videogame.  With breaches in the hull, water comes flooding in, and it cascades.  Seriously, though.  It looks awesome when the crashing waves of doom flood in through the doors or walls of an area you were having a pitched gun fight in, sometimes even to your benefit.  And that is about it.  Th water really looks like it is flooding into the ship.  Great.  The rest of the game? Well..

Again, not horrific, but not the magical amazing piece of “epicness” that all the hype back in the day implied!  First, there are these screenshots and such of your character with some magnificent power.  And it is pretty cool when you can lift things with pillars of water and throw explosive barrels.  But that is all you can do.  Oh, and you don’t play the WHOLE GAME with this power!  FUCK NO!  That would be too awesome, too much fun!  You get these powers in about the last 30 minutes of gameplay and then you have to face the only boss in the game with them.  That is like receiving training with your M16 in the military and being told it’s all you’ll need.  Then you get there and they hand you a fucking rocket launcher and a short faq sheet so you can reverse the blitzkreig!

Then there is your gun.  The malthusians typically have shot guns and machineguns while you are stuck with some state-of-the-art pistol that shoots 6 different types of ammo and the above-pictured MAV hacking device.  I want to use a goddamn shotgun!  A machinegun would be nice, but all you get in that department is some kind of automatic round that somehow makes your gun shoot faster.  That’s not how this works, it will still have the accuracy of a fucking pistol!

I guess the plot holes got to her.

Then there is the story of the game as it develops throughout the game, which is to say it doesn’t.  You get the roughest outline of the idea of a story and then things start happening without any real explanation.  The terrorists are briefly explained in passing, and their goals are only really understood at the end of the game, and even then they’re still a little vague.  There is some kind of backstory regarding Mila Krass, the main villainess, the nanobots she wants to use to kill everyone in the world, and the ship.  But again, there is no real explanation to the player as to why they are here, why she wants them except some video-screens that you could miss if you are in the wrong room at the time.  Most of the plot is delivered through a series of documents and notes that you will most-likely run, or swim, right by.  I shouldn’t have to find the story of the game, you need to GIVE it to me.  The main plot of the game shouldn’t be like a football game at Thanksgiving where a few interested people get into it while the rest of us just ask for the score afterward!

Of course it seems that this was done to provide something to slow the player down as they progress through the game, which plays like a Die Hard movie with a thinner plot and less interesting enemies.  You run through the game so fast because the majority of it consists of you swimming out of the rapidly flooding decks.  You don’t actually fight enemies until a third of the way through the game, which is like serving food twenty minutes into an hour-long lunch period.  It’s just not fun, and I will likely have left to get a hoagie (massive sandwich) at the local Wawa (a convenience store). 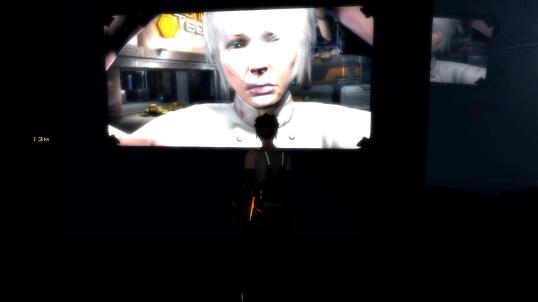 Mila looks more bored than threatening as she slaughters innocents by the truckload.

On the topic of things this game does only half-assed, there is a sort of rudimentary parkour engine in the game, but it’s boring.  Seriously, I am not sure how you can make parkour boring, but this deeply dreadlocked woman is the slowest parkour performer ever.  She makes Altair look like a fucking artists.  It’s like they wanted some elements of Mirror’s Edge in there, but didn’t have time to do it with all the work in the water engine.  Where you do use parkour, it’s slow and encumbering rather than fun and interesting.

But wait, there’s more!  The characters are unbelievably dull and fall into silly stereotypes.  First, this is a game with a female lead and a female villain, which should really be something!  I mean, it gives you a chance to see a battle waged solely between the females.  But then again, you have this snarky, annoying douche-nozzle named “Scoot” talking in your ear like he thinks he’s goddamn Otacon.  He also seems to get off on telling the main character (Kate) what to do all the time, then taking credit for it.  At one point that asshole is like “It’s so draining watching all this action, Kate.”  I imagined him saying this as he sits back in his little spinny office chair on A-deck.  The best part is that later in the game, malthusians storm his area, so he keeps his voice down.  At one point toward the end, Scoot leaves his console as the terrorists might have checked the broom closet that command usually keeps him in.  And then?  Well… he just kinda disappears.  His fantastic exit from the game after guiding you this whole time?  He just walks away from the fucking desk!  And you never figure out what the hell happens to him!

And this isn’t the only character that had a chance at a being interested, but got a bad wrap job.  Chief Bingham… Birmingham…  Mr. B is the chief of security on the Queen, and after you free him from a slow, terrible death he just walks off into a flooded room to “find a gun.”  Not before he has a chance to grumble out some insults of character implying that if you had done your job right, this might’ve been prevented.  That would be like the head of the FBI or NSA blaming their lower-level enforcers for 9/11.  Then you don’t see him again until a later scene in the elevator where Kate looks amazed and Mr. B is killed off camera.  And that’s fucking it!  In the original version there was the implication that Scoot was killed and you meet up with Chief B.  Kate wants to look for Scoot, but they find the room flooded and no Scoot. 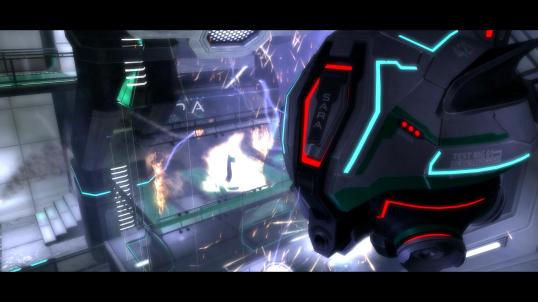 Really, this is a game that might’ve been better titled “Water Physics Engine 3D.”  It is more a game about its mechanics than anything else.  There is a lot in here that games like Bioshock could have used in a sequel to make a neat “final death of Rapture” or something, but Hydrophobia: Prophecy just ends up being bland and flat as a stale cracker.  There could have been an interesting conflict between a badass female protagonist and a super-evil female villain.  Not really there.  Could have had a deep plot with connected characters and a plot that felt real and fun.  Scrap it.  In the end, what you have is a reason to market a water physics engine, and in most games the water physics barely even matter.  This is a game to avoid, with only a few redeeming qualities.  This shit ball is 4.99$ on Steam and I would recommend waiting until it goes on sale.  Seriously, it’s that non-fulfilling.