Sometimes a game is way too much fun and you must talk about it to everyone, the puzzles were tough and the enemies strong I was grabbing fruit all the day long, kitties I’d lift and sluggy balls chuck I would stop rhyming but my brain’s deeply fucked, I’m sure that a comma each statement can’t end, forever this review in rhyming I’ll spend, so I’m just going to type and cut out the crap, so no one feels the sudden and undeniable urge to stab me in the fucking throat.  Just.. one sec… rhyming sickness is tough to break, but I have to focus cause this review’s at stake…  GODDAMNIT!!!

That is the format of the tutorial for this game.  At first it’s adorable but after a while it becomes creeping and insidious, invading every word that you speak.  Your character’s Bloom and her toes are magic, and everywhere you walk a patch of green grass grows.  The goal?  COMPLETE WORLD DOMINATION!!!!!  Sort of.  Actually you have to spread verdant giddiness throughout this skyborne garden that was taken over by the blight monsters, which rendered the Skylings’ garden a barren wasteland.  There are several types of them and I didn’t see them all, but if I kept playing I would have been rhyming for the rest of eternity!  Or at least until someone rightfully stabbed me in the spleen without a medically logical reason to do so. 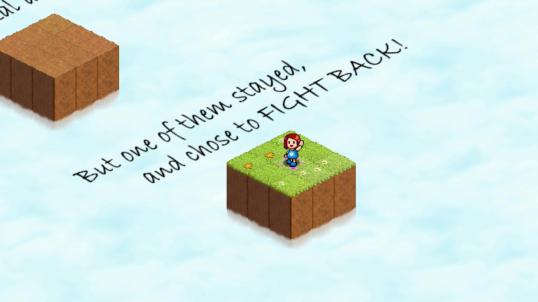 Don’t let her fool you… Beneath that whimsical smile lies the unburdened soul of a psychotic killer. Or just a vegan.  Interchangeable, really.

So, as stated, Bloom walks around each little square and spreads the green grass everywhere, which, in turn, brings the garden back to life.  There are little, dead gardens surrounded by dirt paths and as you surround them each with grass and flowers, they grow right back.  Each garden then shoots out a crop of fruit.  Considering how fast they come out, these people should put up warning sirens during harvest season, or else someone is flying off the skygarden.  Then again, it would help to cull their numbers.  Fruit doesn’t last forever, though, and the next challenge after regrowing the gardens is collecting the fruit before it rots away, without getting caught.  And the blight bastards make it tough as shit,  cornering you until you shrink into an insignificant little nothing.  One of the best games I’ve seen out of itch.io, this game’s exceedingly whimsical is likely to entertain women, children and lyrical leprechauns the world over.  Not to mention the puzzles really are tough as shit.  You’ll often start off in the only safe little corner of the board and you have to navigate the monster hoard.  I didn’t make it too far in the game, but I still had fun all the same.

The first monster you run into is the stone ogre.  These guys have purple horns and only walk on stone and if you don’t pay attention they’ll get you alone and kill you in a corner; this happened to me way too many freaking times!  But since they have a set path they’re pretty easy to outsmart, but they are fast; so try not to find yourself in too many games of ‘step off’ chicken with these guys.  This is where you see the enemy plodding along his stone walkway and you just want to get that last couple squares covered.  Then you turn around just as you finish and run back toward the enemy to get back to the safety of the one smooth square that is close and you’re not immediately blocked from.  A more adorable game has not made me scream with as much frustration.

Sluggies are the orange ooze monsters.  These guys eat everything they can find but you can pick them up if you come from behind.  (wink wink nudge nudge)  But seriously, get behind them and you can pick them up and chuck their gooey, orange asses off the skygarden like a bizarrely adorable episode of american gladiators.  What?!  They made nerf wars look like the most epic thing ever!  When I say they eat everything they can find, I mean they erase your little green patches, and if they break the grass surrounding a garden, it wilts and dies again.  This can be remedied by just walking over the square again, but it doesn’t yield more fruit.  It’s just fucking annoying.  Luckily, these orange guys serve as your most offensive weapon.  If you manage to grab one of the sluggies, you can launch them at other monsters, rather than into the wild blue yonder, and it kill them both, scoring you some points.  This is especially useful if you missed some fruit and need to recoup the losses.

Bats are a fucking nuisance, but they can usually be avoided.  If they catch you, then you can’t move.  This lasts just long enough for you to get caught by a monster and lose, so be mindful.  My best tip is to get to a smooth square if you see them coming at you.  This way you won’t get bowled over by the fucking stone ogres.  Additionally, don’t go anywhere without a kitty to take the blows to its fat, useless body.  It’s asleep, it won’t mind.

The final foe is what I call the gaping maw for two reasons.  I didn’t get far enough due to rage quitting to see these guys.  The game isn’t impossible, just a really really tough piece of enjoyable gaming.  Seriously, it’s deceptively hard.  They lure you in with carefree music and little 16-bit graphics, but then you have to get the last fruit on the giant fucking q-bert level!  Perhaps I was just caught up in the horrifying memories of rage-quit I had on that game, though.  The other reason is that the monster is literally just a yellow mouth.  I am terrified of what it does to you and refuse to speculate openly.  Probably just hunts you down and chews on your bones.  Yummy magical bones.

This level was tougher than a limestone shit, if I played any longer the dev’s throat I might slit.

You aren’t without allies though.  There are the kitties.  Best part is, they are about as fucking useful as you might expect they would be in a war against bio-diversity strangling monsters.  They lay there and purr innonously as they sleep, the little fuckers.  The title screen is just a menu with a purring kitty reclining in the ‘g’ and if you listen for hours you’ll realize that’s the same sound your soul makes as it’s torn from your shrieking mortal coil.  I would just kick them off the skygarden, honestly, but they have uses.  Bloom grabs these guys nonchalantly and plops them down on switches proving that cats basically have one purpose: dead weight.  Throwing them on switches usually has the effect of triggering a pillar to pop out of the ground, which causes monsters to be corralled away from you.  To be fair, however, these cats can also be used as obstacles, and I have used them to turn a charging stone ogre.  See, at least the ogres care about kitties.  Then again, with only one eye, they have no depth perception, so a cat might just look like a purring, vibrating ball of fluff.  That would make me reconsider my path of trudging in a heartbeat.

All-in-all this is a really fun game.  Great pixel art and upbeat music help to give this a really cute atmosphere that is perfect for children and childish adults alike.  The controls can be a non-responsive on the keyboard, but not enough that you can’t get used to it.  Also, there is no ‘save’ outside of the standard level-by-level advancement.  If you’re caught by monsters, you have to restart from a clear board.  It drove me fucking nuts, but it also makes you really think about what you do.  Be warned, though:  this game is full of rhymes and is hard as fuck, so when asked about it your face will fall into a pale countenance, steeped with horror.  In a thin, wry voice you’ll caution “they were everywhere!  In the bushes, in the trees!  If it wasn’t for the kitties, I would’ve never made it out alive!” A paltry 0.98$ on itch.io, I wonder how itch stays in business giving such crap rates to well-made games.  For more info on the game and its developer, check out Mighty Studio’s site!