Now, this game has nothing to do with Firefly, but just humor the analogy for a moment.  In Firefly, it felt like it treated space, matter and physics correctly.  Everything reacted right, there was no sound in space and it was full of excitement and narrow escapes.  Retrobooster does the same thing.  You are affected by gravity, how you are steering and every other force that might interact with your ship.  It makes sense and it is packed with full-throttle moments where I can imagine your pilot hitting the pedal to the floor in a crystal-clear moment of balls-to-the-wall commitment to death or victory.  I am having a hard time finding things about this game that I didn’t like, so excuse me for gushing a little bit. Dick.

Play the tutorial first.  If nothing else it will give you an idea how to steer your ship: more in relation to which method suits you best.  You can use either the arrow keys or the mouse or the arrow keys to steer your ship, known as a Starblade.  Using the arrow keys is a solid method, but it felt weird to me having both hands on my keyboard.  Utilizing the mouse is more fluid, but there is more margin for error.  Both methods are good and fly suitably smooth, the choice is really in what suits you best.

Now, you have two weapons – a gun and a launcher, we’ll call them.  With each you can find a spectacular array of weaponry to equip and deploy.  You can get varied ammunition for your gun, varied ammo for the launcher or a powerup that will make you more powerful for a short time.  For the gun, my favorite ammo variation were the thermite rounds.  These are like shooting smoking pellets of smouldering napalm.  They wreak havoc on enemies that have clustered together, and it happens more than you’d expect.  For the launcher, I have only really had the guided missiles, but they are magnificent.  Nothing better than going into a fight knowing you can start blowing holes in enemies from the start.  In some cases, the missiles give you a fighting chance. Powerups give a lot more variety to gameplay.  Sometimes they’ll give you a scatter shot that fires in a cone in front of you, other times it will be a constant shield that lasts for 25 seconds.  Either way, it’ll be something useful. 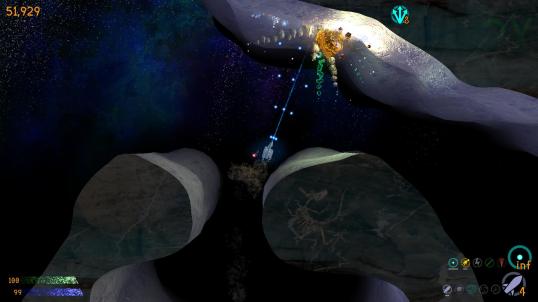 Two of the most important things to keep in mind are (duh) health and shields.  In this game, it is too easy to fuck yourself up and if you don’t get flying down, the enemies just have to sit back with some popcorn and watch you kill yourself.  Hit any obstacles and you’ll take damage.  There are a few exceptions, but for the most part, don’t crash into shit.  Shields are useful because, in the heat of a fight you will end up crashing into shit.  Hold the spacebar a couple seconds to use your shields and avoid unnecessary damage.  Simple as that.  Shields can also be use to deflect enemy fire, but be careful as your shields are limited.  If you do well and kill a lot of enemies in a row, you’ll get a token to increase your shield meter or heal your ship (green bar at lower left is health, blue bar is shields).

Enemies in this game are aliens that remind me of what would happen if Apple invaded another galaxy; they are all white and smooth with softly glowing lights and a sort of arrogance that makes you want to punch them in the teeth.  Of course, killing isn’t everything, and Retrobooster recognizes this.  I suppose this is why the developer made the wide array of aggravating puzzles to solve.  They are things like pushing a button and then flying past obstacles to get to the door you opened in time, or manipulating forcefields to get to the button you opened.  Either way, it pumps your adrenaline and has pushed me into plenty “leaf on the wind” kind of moments. 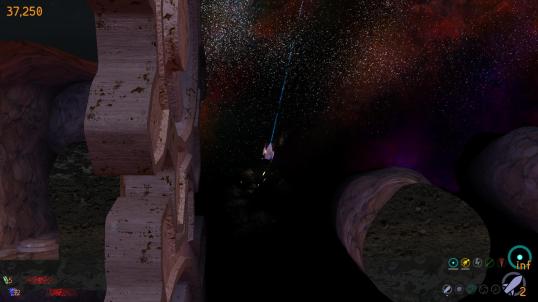 I’m a leaf on the wind, watch how I desperately try not to get blown to pieces…

These moments often launch you through a narrowly closing door only to send you blasting out the other side… directly into oncoming fire.  It sucks sometimes, but in my mind my character and his co-pilot just carry the adrenaline and go from one second to the next, flying by the seat of their deeply soiled pants.  Funny part is, once you’ve killed off enough enemies for the area to be reasonably safe, you start looking for survivors.  by survivors I mean humans that have survived the alien onslaught.

Some things to keep in mind with survivors.  First, they are squishy, flammable and all kinds of easy to kill by accident.  Many times aliens will just walk over them and squash them, other times the detritus jettisoned from an exploding enemy will be enough to kill survivors.  That is why you want to take enemy fire to your shields to protect them, use your ion bolt to blow up wreckage before it can kill them and do whatever else you can to protect these guys.  Next, when you land, you have to do it gingerly.  They will generally avoid you when you are coming down, but once your landing gear touches terra firma, all bets are off and they come running.  Some times your ship might bounce a bit and squash someone under it, other times if you come in too close to the people, they will catch on fire.  This is hilarious, but probably bad.  When they come aboard, they will give a small boost to health and shields.  Not much, but enough to bring you up from a tough fight.  My question is how do they all fit in there…. 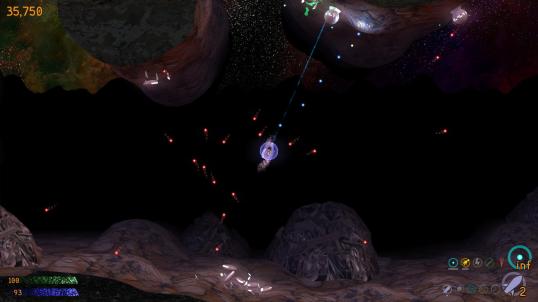 Enemies coming in from all vectors!

Retrobooster is a great game.  Gameplay is fluid and feels great.  It can be tough to navigate and aim at the same time since your shots follow the momentum of your ship, and shots fired can push you backward in space.  It really feels like you are floating around in a low-gravity environment battling foes.  Weapons are fun to use and explosions are satisfying.  Puzzles are a real challenge and you will die a few times, even if you are really good at flying, but that makes the game all that much more fun to play.  You only get two lives per level, which can be a pain in the ass at times, especially since there are no extra lives to find; however, longevity can be attained through skilled maneuvering and liberal application of ion blasters.  The most irritating thing about this is that sometimes the people look like they have no joints, sort of like Rayman, but there isn’t anything annoying enough to make me not want to pay the 17.99$ for this game.  If you are looking for a spectacular space-fighting challenge with a retro feel, this game is going to rock your ‘verse.  Really Slick lived up to their names on this one.