This indie title has a lot of potential, which is sadly unrealized.  Strap yourself in because this is going to be a non-stop rage-fest from start to finish.  First, the things I liked.  The RPG/First person combo.  You have an inventory, you level up and your skills are based on stats.  You can take skills to become a psyker, a cybermancer or a guy with a big fucking hammer that squashes things. You can shoot holes in everyone.  You can research new weapons and other things useful to your missions.  Killin’ dudes, too. I love killin’ me some dudes.  I actually haven’t seen a game that blends killin’ dudes with RPG aspects well since Dark Messiah: Might and Magic. The graphics are pretty alright, too.

So what is all the rage about?  Well where do I start? Story. That seems like a good place to start.  This game seems to be what happens when a game made by people foreign to the english language make a game and are forced to hastily translate it for the Americans.  Admittedly, the tutorial videos showcase something that looks like it could be either french or latin. But that is no excuse for the aphasic dialogue and strangeness in peoples’ mannerisms.  Then there are the archives!  After the initial mission there is the objective (?) to go looks through the archives and get an idea of what the fuck is going on.  Admittedly, this would be the best place to start in a normal RPG-esque shooter since it would be nice to have an idea what is going on. No. FUCK no.  That shit must’ve been written by someone profoundly enlightened by the mystical qualities of numerous drugs, cause it is barely intelligible. Seriously.  And I get the feeling that these archives are supposed to be the collective knowledge of this “EYE” group.  It amounts to a nonsensical series of events that don’t seem to stream together and are explained in the vernacular of a retarded college student.  Commas are in weird places, syntax doesn’t match up and there is no guidance as to which terminal one should read first.  Sure, all the guys walking around brandishing badass weapons and shiny armor seem to allude to some well thought-out decision making and a neat back story, but that just doesn’t come through. Two of the terminals seem to be crappy science fiction written by a grammatically inept, anti-social high school student during study hall.   This is about a guy named Shinji who seems disillusioned by the super-individualism of his society and listens to spiritually-oriented radio stations.  Also, he scoffs at the drive for space exploration.  Later he attacks a couple in the park after they finish a date.  He might be in wolf-form here, but that is never explained clearly, just vaguely referenced.  He cuts a guy’s throat then rapes and beheads his woman.  ALL OF THIS is just a backdrop for what seems to be a possible invasion by aliens(?) of a nebulous and spiritual nature.  The other two terminals relay information about the timeline which seems kind of cool, but again is hampered by the syntactical grace of using a sharpened rock for fucking brain surgery.  The console that tells you current events directly references ‘you’.  As in the main character.  And it is done in such a way that it seems they took what was supposed to be on the back of the game’s case.. or maybe in the instruction manual.. and just slapped it in the archives.  All very pretentious and mysterious in a distracting “what the fuck am I reading” way and less in the cool mysterious way.

So, storyline completely fucked ass-backwards, I realize there is a drone with a video of me telling myself some shit I forgot.  Most of it, again, makes little to no sense. O, yea! Cause he directs me to the fucking archives for elucidation. Fuck that guy.  I wanted to buy some guns and realized that I’d need to level up mah skillz to get the desired weapons.  No big. Do the work, get the toys.  At some point I spoke to some guy that I think was an important dude.  His name was Nimanah.. or Shivrama.. sounded like something out of the Bhagavad Gita.  He basically told me that he was working against my mentor and suggested that we’d be killing him later.  For a group of people that seem to vaguely want you to be stealthy, this guy was subtle as a cinder block.

The weapons seemed to work well, I mean, the guns shoot, the swords slice.  Fun fun fun. I cut off a guy’s head by accident, too!  I power attacked some guys in the sewers and they just flew apart like crash dummies. That was pretty neat.  There is also a resurrection system. You seem to start with 10 rezzes and a sword stuck to your body somewhere. Seriously.  I ditched my starter sword for some dual katanas (What?! I wanted to dice the bad guys up like chilli and fries!) only to discover that I could still switch to that weapon.  That weapon which I no longer had on me. 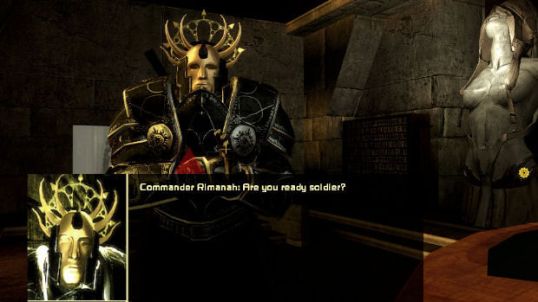 So after making plans to buy some guns and cyber tech, I go to the Commander Rammalammadingdong pictured above to start the mission.  In the mission, I meet this guy that berates me for not being stealthy (seems a common form of greeting for these pricks at this point) and, after some clumsy conversation boxes, he tells me all the objectives in the nearest three zip codes. Did I mention that these goddamn things don’t disappear after you fucking complete them? Like you are starting a collection of floating glowie waypoints, or something.  I then creep along this gangplank and am seen and shot at by enemies. Then more enemies.  Pretty fucking soon it seems like the ENTIRE FUCKING PLANET has come out because they saw a gunfight on the news.  Federals and random thugs chase me down like they have a pact to kill me and then duel it out.  Oh, did I mention this game is racist as FUCK against white people?  No, really.  In a world of spiritual people whose armor and names seem to be a vague conglomeration of Middle-Eastern, Indian and Asian cultures, the enemies, called FEDERALS, are white and wearing either nazi storm trooper armor with officers sporting what appears to be the garb of imperialism-era soldiers.

So after slaughtering droves of aimless fucking morons with guns I hacked a bit.  Hacking is fun.  It is a duel with a cyber enemy for control or destruction.  If you lose a hack this big annoying fucking thing comes across your screen.  It flashes purple, red and green, changes expression from angry/happy to laughing and generally tries to give the player a seizure, but does its job of reminding you not to fuck that shit up again.  Seriously. And that shit sticks around for a long fucking time, too!  It certainly makes for interesting gunfights, though. Heh heh…

Generally, I would tell anyone considering paying the $9.99 for this on steam to save their cash.  This game is what happens when someone has an awesome idea to weave Warhammer 40k influences into a Shadowrun campaign.  Weird, super-religious protagonists and a dark cyberpunk world.  This game dreams big and rambles unintelligibly.  It wanted to be something neat, something memorable.  It wanted to break boundaries and shatter expectations.  It ends up roaming the streets muttering to itself and wrenching its mangy hair as on-lookers cross the street to avoid it.  Its delivery feels rushed as hell and could’ve been so much more than the shitbox that it is.  This game seems to have a cult following, though, and if you are into bizarre worlds with rambling story-telling and shitty mechanics, then this is for you.  I wish I could get my money back, but that isn’t happening.  I played this game for a total of about 3 hours, 2 of which was spent reading garbled english.  The rest was spent shooting dudes, which is fun, but there are many much better games for that.  Avoid this at all costs.  If you disagree, fuck you.  You’re probably one of those underground hipster assholes. Fuck…