In December 2013 a game was released and it seemed as though everyone on Steam was buying it at the time.  That or Rust, but fuck Rust, this one is for Starbound.  What is Starbound? Well, remember Terraria?  Starbound is like Terraria, but fucking amazing.  You are an exiled member of one of 6 races: humans, Avian (a bird race that have a Mayan feel), Apex (a planet-of-the-apes-style monkey dictatorship with standard high technology), florans (plant people), Hylotl (a fish race that have an asian motif) and Glitch (a robot race with an oddly steampunk-medieval motif).  As an exile you are forced to the ass-end of the galaxy.  This is where shit gets interesting.  Just watching the trailer you hear this music foretelling ultimate freedom and ecstasy.  It’s almost surreal as the screen pans over 16-bit landscapes and NPC towns.  I was just like “Really? That’s it?”, but don’t let the retro graphics fool you.  Just beyond that pixelated exterior is a heart of gold. 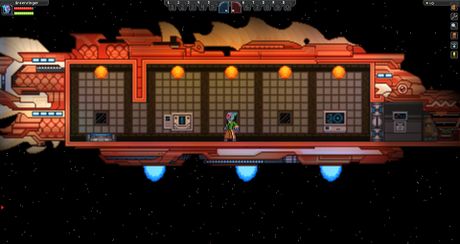 First there is your ship.  You start the game after character creation (which has a startling number of options for a 2-d game) onboard your little ship orbiting a planet.  You’ve run out of gas and need to find something to use for fuel.  So, after looking through the bare locker in your spaceship, you beam down to the planet’s surface.  I looked out at the planet and saw strange swirled patterns and pink continents with green oceans.  This looks bad, I said as I stepped trepidatiously toward the teleporter.  I was out of gas and had nowhere else to go.  Surely the game wouldn’t start me nearby a toxic planet, would it?  I make planetfall and look around.  All around me I see brains.  Brains growing on trees and out of the ground, brains on bushes, brains in the background.  “I have got to get the fuck off this weird-ass planet.”  With my Hylotl, Pearl, I decide that I have to start looking for building materials.  It is getting dark and bad things always happen at night, doesn’t matter what you are playing.

So I get a little rudimentary hut going and immediately after night hits, a swarm of ugly little fire-spitting birds fly out of nowhere.  I am glad I have my house.  There are also these weird crooning creatures outside.  Not going to fuck with them, they seem worse than the birds.  So I get my bow, climb out on the roof and shoot down a couple birds.  This nets me some food, which I cook.  Eat some and store the rest.  Now, there are a number of crafting options in this game.  You can craft weapons, armor, building materials, objects storage containers and almost anything you can think of.  You can also craft things you find in the wild, and, believe me, go roaming a bit and you will soon see that good weapons are worth their weight in gold.  You’ll run into huge monsters that kill you with a fart, accidentally.  Then there are the well-decorated temples of the lunatics with spears and guns.  These guys have everything from sawblade trap pits and all kinds of other shenanigans.

And once you find coal, which can be used to fuel your spaceship, you can get anywhere.  Ironic that the universal fuel should be fossil fuel, but it is a game.  What are they going to have you go look for that would be easily available and get you to a new planet if you started somewhere stupid.  Like the pink brain planet.  I wanted to get out of there so bad, and I did!  The game even makes you build a communications array that summons a giant flying saucer boss fight that spits out penguin troopers.  I did this in the middle of an Apex city thinking the height of the buildings would give me some better range.  It ended up getting nearly the entire city slaughtered, which is ok, since I hate those ugly monkey bastards anyway.

Laugh it up, but this fucker means business…

Then there is the multi-player.  You can coordinate with your friends, transfer to their ships etc.  Teleporting to their ships makes it easier for you all to agree on a home planet, too!  You can leave one of your ships at youe home planet, build a base and then use the others to go exploring!  You can then teleport back to the home ship when you have resources and other things for your base!  It’s an awesome strategy that make socialization in this game well worth the effort.  Not to mention, you can take down that penguin UFO a hell of a lot easier with other players.  Another interesting feature is that the gameworlds go deep as fuck!  You get down to where it is lava.. then blood and bones and all kinds of other weird ass shit.  Another thing is that each player can get abilities that you can use, like super jumping and forcefields and stuff!

So, in a game where I am having trouble including all the neat stuff that I like about it in just one post, what about it bothers me the most? Huh? HUH!? Rule 34. That is what. DeviantArt, too! There is a strong fan base around noody pics of the races from the game.  And the thing about it that bothers me the most?! Well, it’s that.. I.. am not.. strongly enough against it… 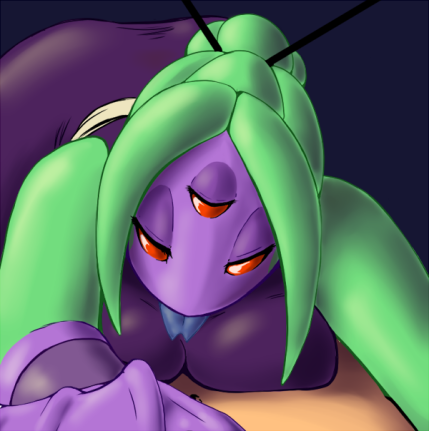 I feel like I should be harder on this.. I mean..hngh!