I’m not sure if I ever said it, but I love strategy games.  Warlock: Master of the Arcane is a game that sticks out in my mind as a perfect example of the genre.  It takes after my all-time favorite strategy series, Civilization, and really gives fantasy gaming some serious respectability, rather than just another action-thrill ride through a well-known and profoundly over played fantasy series.  Lord of Magical Fashion Accessories aside, Warlock is a semi-serious game from a franchise known to do everything but act all self-important and serious.  This title in the Ardania franchise reminds you that, while you might be micro-managing the economics of an empire while keeping the ravenous hordes of enemies, ghouls and humans at bay, it’s ok to giggle a bit.

So part of the reason for posting this is I played this game a whole lot over the spring and finally realized the sequel came out.  Another title that suffers from lack of respect, this title received a 71 from Steam’s game critic system, the meta-critic.  I am at the point where I will tell you not to trust the meta-critic with this one.  Warlock is far above a number of other worse strategic titles.  So, Ardania is a realm comparable to that of Heroes of Might and Magic, considering how often the denizens are killing each other, but it is much more comedic.  MnM’s “anti-hero focused, villainy rises to power” game was a story about a demonically possessed man that convinces all his friends he is actually a good guy before killing their daughters and summoning his father, a demonic deity, to eat their souls: a demon-Jesus, hence it is called Dark Messiah: Might and Magic.  Ardania’s version of this was Impire: you are a the dark lord, evil mastermind of horribleness.  Trouble is, you were summoned by a schmuck, so you are a tiny imp.

To start Warlock, you get to configure the vast map on which you’ll play.  I am an obsessive lover of turn-based strategy games, so I always set the size up really high.  There are also the usual parameters to configure (number of foes, win conditions, difficulty) but the most interesting adjustable value is the number of alternate worlds.  Aside from the main map that you can play on, there will be a number of alternate worlds parallel to the primary one.  Now, as far as I’ve gotten (I’ve built a sprawling empire of monsters) I have yet to encounter the portals for this mechanic.  I know that I am worried about it, though.  Good chance that, knowing my luck, the first one I find will be the link to the dimension of darkness and evil shadows will pour out to consume our souls. 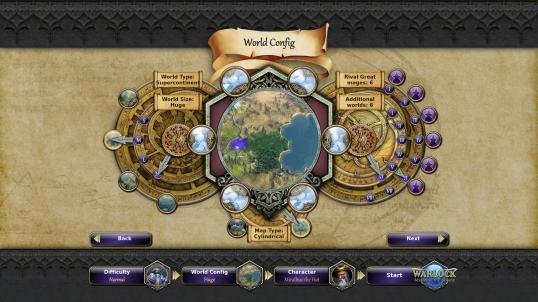 It’s like a big steampunk butterfly of world-generating glee!

Once you have you world set up, you pick you ruler and jump in!  One of the more disappointing elements of the game is that it has 3 playable races (4 with the DLC): humans, monsters, undead and Arethi elves.  Arethi elves are basically just emo elves.  Now the humans get the most gold production, monsters  have the best food production, while elves are good at all three (but not comparably so) and they have the best research.  I favored the monsters for two reasons, first being I like to eat and eating makes my army bigger.  I can always steal money from enemies.  My favorite element of the monsters is that they have the most variety to their army.  You start off getting ratmen and goblins and, for my character, you move into lizard people, the Koatl.  I can also get a giant fucking turtle as an ultimate unit!  It’s great!

The way city-building is almost exactly like Civilization.  You have a central city that grows in population and thereby grows in power.  Your capital will come to have a full-on bitchin’ castle at some point, which fires at nearby enemies.  You’ll construct buildings on the nearby land and assimilate resources necessary to fantasy empire-building: food, gold, mana and research.  Now, where this game differs is that research is not used for technology, but for magical spells.  Each spell has a supportive, offensive or strategic use of some kind.  Things like lightning strikes and fireballs are obvious, but things like water-walking and terrain-alteration is just interesting and useful, especially when turning farmlands into wasteland.  The final spell is the Unity spell.  Similar to the spell that hippies attempted o cast in th 1960s, the Unity spell makes everyone sit down and sing cumbaya and smoke pipe-weed, that shit’s for sissies.  It is much more fun to kill everyone and take over their shit.  Of course, if you take over their cities, you will have to contend with the lack of farmlands you caused without an ounce of forethought.  Another thing that was irritating about this is handicapped production on all fronts when controlling the city of an enemy race.  This seems a bit harsh, but if I, a human, was forced to rub elbows with goblins and ratmen, I would be irate and difficult to rule, too.  I am ruled by humans and I am already irate on a regular basis! 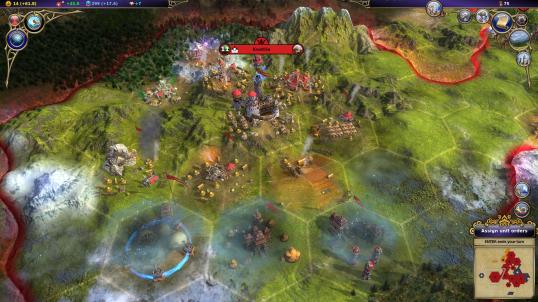 Welcome to my seat of ultimate powaaaahhh!

Some of the problems posed to you as a ruler come down to building a city in the right place.  While in normal strategy games you can build mostly everywhere with minor economic modifiers that might come to be frustrating.  Build a farm on the roiling lava plains and your building will cost you 3 gold per turn AND you’ll have 20% reduction in whatever that building produces.  So, generally, don’t fucking do it.  Also, should you decide that a burning plain with rivers of lava is an acceptable risk for military advance, your units will have to contend with a movement penalty and a 50% defense penalty.  Not worth the fucking trouble, unless you run your shit like Pickett.

Further features of this game involve a modest plethora of special resources, like donkeys and pumpkins.  I really enjoy the things that can be done with these, too.  I have my koatl houses that I build in swamps, a shrine of the rotten pumpkin, order of the stubborn knights and other things.  Stubborn knights are powerful and ride donkeys.  They are eternally stubborn and hold grudges as high as universal mandate.  As you play, you will notice the hordes of wild animals.  These serve function of barbarians from the Civ series.  They are random marauding groups of enemies that serve as something to kill besides other players.  There are also some special enemies in the water, like krakens, which will murder the fuck out of your ships until they’ve seen some battles.  They guard treasure troves that are well worth the fight, including items for your Lords.  These lords can be hired and deployed to deal massive damage or healing.  Employ them right and you will slaughter enemies by the droves, employ them poorly and they will be the funniest most expensive character bios you’ve ever forged an empire to buy.

One of my favorite features of this game are the missions.  Throughout the game you will be randomly assigned missions to kill neutral foes, AI foes or build things.  You might also get a mission from the gods to build a shrine in their honor, which can only be built on special holy sites.  This gets you sway with the god in question and, in turn, their favor will grant you special features.  I am currently struggling through the demands of a needy deity that wants me to want him.  He demands that I build a shrine to him on a holy site.  It’s a little annoying and I really want to make that god happy so he’ll give me shit, same way religion works in real-life.  Not open to the idea of pissing of deities with phenomenal cosmic power. 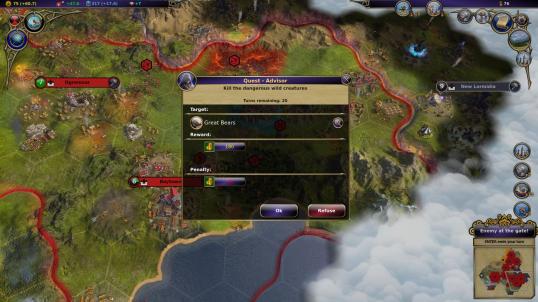 The go kill bears mission. The pivotal moment in every epic story line.

In my opinion, this game was given no quarter by the meta-critics.  It is a stupendous game with some flaws that don’t ruin the fun parts.  Not to mention it is reasonably priced.  You can get Warlock Ultimate edition on Steam for 24.99$, which includes all the DLC with the core game.  You can also get the fucking entire Majesty collection for 69.99$.  I am pretty sure I own 90% of these games and I still want to buy it.

As it is with all things, there is something in this that pisses me off unnecessarily.  Anywhere you haven’t explored there are clouds.  CLOUDS MAN!  I fucking feel like there is a roving bands of stoned hippies just over each horizon, and, like all hippies, they break down camp whenever anyone that might spoil their convention of hallucinogenic enjoyment. Fucking hippies!  I wish I could march my fucking army down their throats and murder all of them with the rage of monstrous fury! Then subsequenly enslave a remaining few so our society would have a fresh supply of dubious plant-life to smoke recreationally in the states of Washington and Colorado.