I am a huge fan of space shooters, but this one is less a space shooter and more a spaced-out shooter.  This is a title I recommend to anyone on LSD or Acid, because it is intense as hell.  Of course, I recommend anyone with Photosensitive Seizures avoid this title altogether.  I am photosensitive in general and this game made me feel a little nauseous and headachey after about an hour of gameplay.

First, keep in mind that this game is a sort of space shooter.  You are in a spaceship and there are wormholes, but that is about the only thing this game has in common with space, real or theoretical.  Click the left mouse to fire a stream of plasma and steering is a bit difficult due to low gravity.  When you start you are a bit slow, enemies are tough to hit and, if you put the game on insane difficulty as the game instructs, you’ve died a couple of times already.  That’s ok, honestly, I have yet to discern any real point to this game outside of “get a fuck load of points.”  That is ok, though.  It is a good bit of trippy-ass fun.

dashing through outer space in my plasma-shooting ship!

There are three other types of entities in this game aside from you: ghosts, flowers and nom-noms.  Everything has a reticule around it in-game, though, so locating them won’t be too too difficult. Your allies are ghosts.  These beautiful beings look the way a child might imagine a soul or angel.  They have a central orb with fluttering wings and a vaguely defined look.  They’re tough to spot with just the naked eye, especially against the shimmering spaces of the game.  If you fly through them, you’ll heal your life-bar and gain a speed boost.  Finding your life bar is a challenge of its own, but it is the solid bar at the top.  The green/red bar on the right of your aiming reticule is your velocity bar.  No numbers, just visual approximations.  The other entity type is the flowers.  These don’t really offer boosts, but they do help you hide from the enemies.  They are more defined than the ghosts, and have a colorful interior.  I am pretty sure they don’t move, either.  They’re like nebulas that keep you from detection.  You enemies are nom-noms.  These guys look like someone took one of Mario’s Big Chomps, covered him with neon lighting and started a light-stick rave party inside.  These guys go around mauling your friends.  They eat the ghosts and it’s your task to kill these fuckers.  And it is tougher than it sounds, too, even on normal.  Aside from chomping down on ghosts, they will also shoot plasma bolts at you.  This is frustrating, especially when you start off, since you are slow as shit. 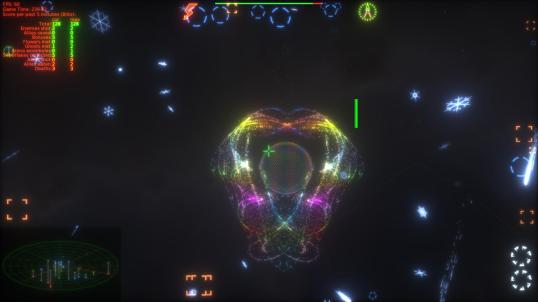 OooOoO! Ghosts are so pretty!

Yes, those are snowflakes in that picture.  When I got into the game, after it explained how I play, I went through a wormhole into this area that had a big-ass Christmas tree on a big red ball that throbbed to the pulsating trance of the music.  It was cool, especially when it played Christmas music, but it’s FUCKING JULY!  Whatever.  I guess it has just been a long-ass time since I last played this game.

Now, if you want to speed up from your initial slow-as-sex-in-a-pool-of-molasses speed, you have to either fly through ghosts, which can be tough to manage, or find the power-ups.  There are three of these things as well.  One boosts your speed, as you might’ve fucking guessed.  But it doesn’t just boost your speed, it more than doubles your speed bar, so getting these whenever you can, even if you think you don’t need it is always a good idea.  I am pretty sure this will temporarily stack after flying through a ghost, so it will be enough to keep enemy fire off you for a bit.  Your next power-up is the power… uh… power-up.  This one makes your plasma deal spectacular damage.  After grabbing this beast, you’ll mow through nom-noms like nothing.  The last one is auto-aim.  Just center your reticule on your enemies and let the power-up do the rest.  Normally with all the flying about and such, you have to lead your enemies to (hopefully) hit them and land a kill.  This power-up makes all that so much easier.  Just get them in the dotted circle and they’re toast.

I said there are wormholes, right?  Fly through one of them if you are tired of the area.  I was sick of the Christmas-themed area and wanted to get out into the greater game.  It was well worth it.  I was greeted by a wide range of procedurally(?) generated spaces full of scintillating beauty.  I really cannot say enough about that.  It says it is a fractal shooter and it really is.  Every space is shaped by invisible fractal variables that paint a spectacular picture.  The choices of colors are also really nice, but can be headache-inducing.  Its look makes Polynomial feel like another game that remembers how we were told games would be “in the future” when we were kids growing up in the 90s or the 80s.  This game really is great, and gives you a chance to just zap some dudes, no strings attached.  The music often has a highly-required trance feel to it, but sometimes you will get some really elegant piano music that really vibes for you.  It’s pleasant. I would call this a really artistic spaced-out shooter that lets you enjoy yourself and really vibe to the music.  Well worth a play and I would even say it is well worth the 6.99$ asking price on Steam.

What really pissed me off about this game?  Everything is shiny and neon colored, sparkly and pretty.  Some fucker hid the goddamn wormhole in the Christmas area, so I was fucking stuck in that section for fucking ever!  A lot of times you will find yourself just struggling against the graphics to see anything, and it gets really aggravating at times.  They have a map, but it is kind of 2D, so it really feels like it is for the look rather than any kind of useful fucking help what-so-ever.  Whatever.  I will just go off and play something that makes a lot more sense and requires me to do inane tasks rather than letting me explore shiny and beautiful space-scapes.  That should chill me out.  Who am I fucking kidding.  That will never happen.