Roger Ebert was a movie critic who died sternly maintaining the position that video games were not art and never could be considered art.  To be perfectly honest, with all his years of experience with the artistic medium of film, it is easy to see why, nearing 70, he was unable to conceive of games as art.  In an article from his own journal, aptly entitled Video Games Can Never Be Art, Ebert details the reasons, in his mind, that games can never be art.  But asking Ebert, a man in his 60’s at the time who is entrenched in years of film appreciation, is the equivalent of asking a person that adores mexican food to try a fusion cuisine including mexican, asian and Hawaiian styles.  Simply stated, his years of experience in the film industry had Ebert inured against the kind of forward thinking required to take that next step into games as art.  He spends the article calmly explaining why various games are not art, comparing them to Chess and other simple games.  He looks at the game mechanics and trivializes about them without exploring the ideas and the implications of what this actually means about the characters, and the player as a participant.  This would be like me going to a movie and saying “This is just a piece of entertainment projected onto a public screen.  It couldn’t be art, look how fake it is!” while millions of people after watching 12 Years a Slave would be well within their rights to politely disagree.  It doesn’t matter how many accolades and degrees I possess in another, venerable medium.  But this shows the level of his own ignorance, frankly.  This man who achieved lifetime achievements in film and is widely regarded simply could not conceive of games as an artistic medium because they are not relevant to him.  And that is ok, but it makes him and his input irrelevant to any conversation concerning games as an art form.  This article will be one of those discussions.

4PM is a game made by Bojan Brbora that discusses how we deal with grief.  You play a woman, named Caroline, who is on the very last threads of her own rationality.  From the look of the game, it is very clear that she is a heavy drinker.  Everything has a thick, hazy hangover look to it.  Caroline stumbles out of bed with her slow gait and rolls a bottle in the sink, joking about skipping breakfast.  Her life is in tatters, her minimalist apartment is a mess and her answering machine is full of messages from voices brimming with concern.  There are pills and cigarettes on her nightstand, the window is open: everything in her life seems to have a sense of reckless abandon.  When you start up the game, it has a heavy sense of itself with a dark soundtrack.  Even the tutorial leads you to the edge of a tall rooftop where your character blacks out to a scene where she is driving.  It goes black again, you hear what sounds like something hitting a car in the middle of the day on a busy street.  Someone screams and the game starts. 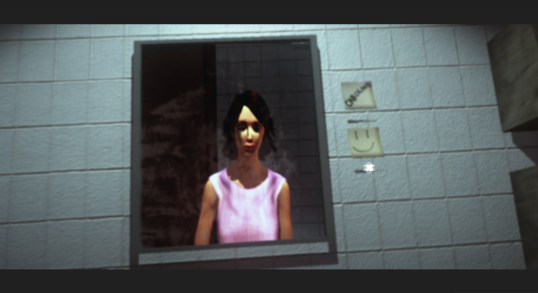 There are very few ludic sequences in this interactive experience that one might point at and ridicule as non-artistic.  The places where these sequences exist are very feasible, dark and almost humorous.  Honestly, each one evokes a number of emotions for anyone that might have a similar experience.  There is the party scene where you have to find the toilet before the timer runs out and you vomit where you are standing from over-indulging.  Your character dances some and tries to buy another drink, but is flagged by the bartender.  Granted, I’ve never been there, but I have certainly ended a couple nights of drinking over a toilet.  As Caroline stumbles around, the room seems to spin and undulate as the music booms and the haze of the alcohol closes in around her.  I have never felt so claustrophobic in an open setting before.

Go ahead, just puke in the flower pot. No one will notice.

Another sequence features Caroline at work where she sees a few options that suit her better than getting her work done.  She could move over to a personal computer where a fresh game of Arkanoid awaits, or she can sneak a few drinks in from her personal stash of whiskey in one of her drawers.  After playing a little arkanoid and downing my drinks, I am ready to try sneaking out of the office, it seems.  Just don’t get caught by that douchey little prick Keith.  The fucker is patrolling the hallway, making this a tense scene where you realize just how deep into depression and desperation this woman has fallen.  She is ready to risk her own livelihood just to sneak out and have some alcohol.  It is sad and frightening.

As you make your way out to the stairway, you see a man cast you an impassive glance as he continues up to the roof.  Extremely unsettling.  You have the option to pursue your vice to the bar below the office, or pursue the curious man up to the roof.  These choices decide how the rest of your day goes and, invariably, the rest of your life.  Without spoiling too much of the ending, should you go up to the roof, you pick up pieces of this man’s life and discuss with him in an attempt to bring him back from the brink.  I have had a number of friends that contemplated suicide and even had to call the police to intervene on one occasion.  Talking someone back from the edge is difficult, especially when your immediate plans were to just go get wasted during the work day and tap out.

Just think about it.

Everything about this experience speaks to how video games are truly art.  Perhaps the interpretation of ludic games vs. artistic works is a little undefined, but there is definitely something more to these pieces than irrelevant critics of other artistic media are willing to admit.  The fact is that art evokes emotions and makes you consider yourself in a new lens, one you might not have otherwise entertained.  4PM is a testament to videogames as a method of conveying that level of experience.  Sometimes it is not enough just to see something happen on a screen, because you can walk away from that experience.  I can watch a movie like 12 Years a Slave, be deeply affected by the story of Solomon Northup and be brought to tears.  But in the end it is a movie and I can walk away from that.  Although 4PM is about a woman dealing with grief, it is powerful, not because it challenges anything in society, but because it challenges me.  Because it is an experience that I have, and an experience in which I participate is something I cannot just walk away from.  Such an experience, real or virtual, is one that I will take as a part of myself for the rest of my life.  This experience is 4.99$ on Steam.

The only thing that I really found problematic about this game is, depending on the choices you make and what you do in the game, your ending might differ from the one suggested in the game’s tutorial.