Demon are among the safest enemies to place in a videogame.  They are a generic representation of evil and they are often pretty ugly, so you don’t even have to give them red blood.  Demons can be smacked, berated and blamed for all the problems in the game because, simply stated, many people do the same thing in real life.  Obludia is a game that embraces these old-fashioned theories, employing a retro arena-shooter aesthetic to make you rage with overpower fury.

Now, before you grab Satan by the balls, you have to set up controls.  This is something I am becoming more and more frustrated with, and maybe it’s because I still have to install the appropriate software, but the standard for gaming right now is to use the mouse and keyboard or the Xbox controller as input.  Personally, I prefer the DualShock4 since I plan to get a PS4.  This is not supported by most games, especially indie games.  The simple fact is, it likely takes extra time to code in and the xbox is a microsoft product, so I surmise that means the Xbox controller is more natural for the PC to pick up and easier to code for.  I am not a developer, but can’t people at least start adding it as an update later on?  Moving on. 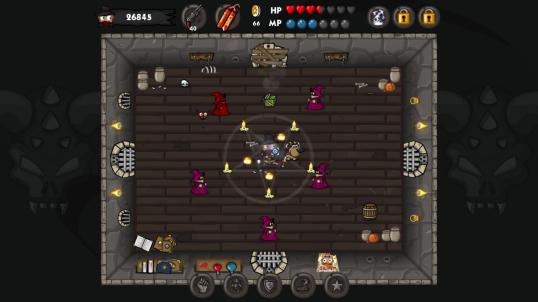 Uhh… hey guys! Is this the place for synchronized chanting practice?

You play the role of a masked, fedora-sporting bandit (?) whose sole purpose in life is to kill and plunder.  Then again, you spend most of your time swatting flies and killing rats that it feels a little more like a crossbow-wielding extermination service.  Granted, you also have a fair number of zombies, blobs and other classic enemies.  Fans of Smash TV will likely enjoy the hell out of this title.  Your numerous weapons all have a particular poor-man’s Van Helsing feel.  They are a sword, crossbow, pistol, shotgun, machinegun, mines, TNT and magic.  Though I’ve had trouble getting the magic to work properly, this is mostly because I spend a lot of time avoiding enemies.  I consider TNT to be pretty magical, though.  One of the biggest issues with this game is that you have to sort through your weapons in one direction.  You scroll through by rolling the mouse wheel one way, but backing it up doesn’t scroll your weapons back.  It’s frustrating and requires me to pay too much attention to my current weapon.

Again, while enemies start off basic and typical, they slowly ramp up in difficulty.  The challenge is the number of foes you face.  In an arena there will usually be four doors that will spew enemies into the room.  Sometimes one is boarded up, sometimes there are only two, but they typically come from all directions in droves.  Luckily, there is help. 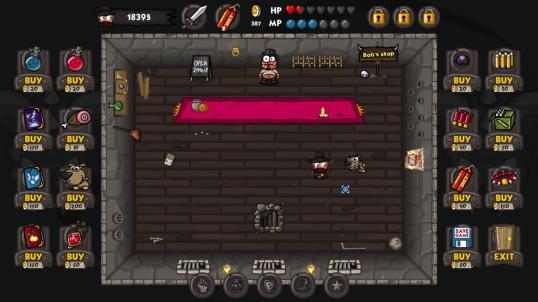 First there is the shopkeeper.  Now, I am not sure if he eats bean burritos all the fucking time, but his standard animation has him squint before farting every couple second.  I shit you not, he must shit his pants.  Couped up in a small, windowless dungeon room full of enemies is likely just baking that shit into the walls.  And there is a shop every 3 – 5 floors, too!  And you go down, not up!  That means these burrito-munching cretins are farting up a storm with the reek permeating upward through the dungeon.  I cannot imagine the smell, but now I know why the main character is wearing a mask, although he should probably have sprung for an oxygen tank instead.

The shopkeepers each have a shop full of breakable items, so even if you don’t have much gold when you get there from slaughtering foes, you can get plenty on arrival.  You can even stab the shopkeeper with your sword until he farts out a modest pouch of burrito-money.  That’s right, we’re trying to save you calories you nasty fucker.  The first time you join Bob the Shopkeeper, he has a dog named Kiwi.  Adorable.  Grab Kiwi, cause you’ll need him.  In a fight Kiwi will grab money and drops and bring them to you, once you start getting hit, Kiwi loses his shit like the incredible fucking hulk, grows Popeye arms and starts man-handling enemies.  This phenomenon is seen in the above screencap.  I guess Kiwi thought Bob’s farts were suffocating the character.

There is also a little bat in a cage.  If you free him, he’ll follow you around and fire a purple.. uh.. bat fireball at enemies.  I guess the little guy was some kind of mage leftover from a race of super-intelligent, mystical, pacifist bats that once inhabited this dungeon.  Or a game mechanic.  That’s also possible, I suppose. 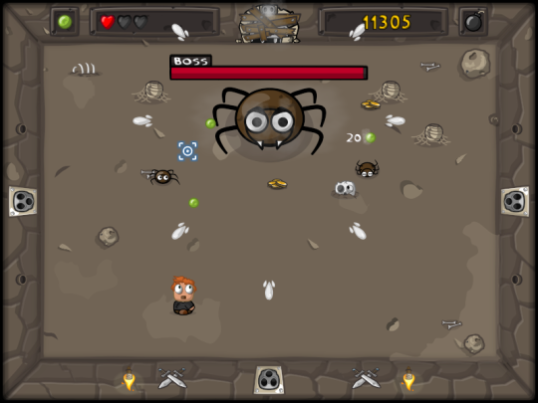 So THAT’S where all the extra-bean burritos went!

Another noteworthy feature of Obludia are the bosses.  They are inventive, difficult and remind me of every boss in A Link to the Past.  Honestly, though, they are tough, and you need to employ all of your skills running around like a terrified maniac launching TNT and firing shotgun rounds at these guys.  I didn’t have many issues with Obludia outside the lack of DS4 support, somewhat slow character movement and frustrating inventory mechanics.

In order to remedy some of those problems, there are a number of pickups that you can get to accommodate.  There is the berserker doll, which makes you slap on some woad and go ballistic.  You shoot faster, swing your sword harder and take on a generally more sociopathic demeanor.  Pickup the wooden cross to kill everything in the room or you can grab the swift feet pickup to run much faster – great for enemy avoidance.  I don’t know why the main character can’t just do more squats, but hey, whatever works.

The music is enjoyable, and not ear-grating at all.  The sounds are a menagerie of old-school game sounds, but the graphics look more like a flash game off of Newgrounds.  Indeed, the game itself has a “new-retro” feel that is definitely appealing.  To make this a really awesome play, however, some serious dusting up would need to be performed.  One peculiarity is that the game starts in windowed mode which can be changed to fullscreen.  I would have no desire to put it in windowed mode if it wasn’t so irritating to fucking exit the game.  Seriously.  Fullscreen it then exit the game.  There is a “thanks for playing” screen that makes you look at it until it disappears, and it is there for what feels like too long.  We see the words, enjoy the ambiance and get the gist.  Thanks.  You’re welcome.  Can I move on dammit?  It just makes the game feel like a overly-attached girlfriend that is like “WHY ARE YOU LEAVING IF WE BOTH APPRECIATE EACHOTHER SO MUCH!?!?!?!?”  I know it is a fairly trivial thing, but it does get irritating when you want to rage quit a game and can’t just log out from fullscreen mode rapidly.  Honestly, simple solution.  Cut five seconds off it. Done.  Otherwise, go buy this game if retro arena-shooters are your thing.  It’s fun, has a heightened sense of gaming tension and a sort of humor that permeates the game like Bob’s bean-burrito farts.  8.99$ on Steam feels a bit much, but they seem to be making regular updates to fix issues with the game, so hopefully the price will encourage the devs to make necessary changes, and maybe even add a little extra content!